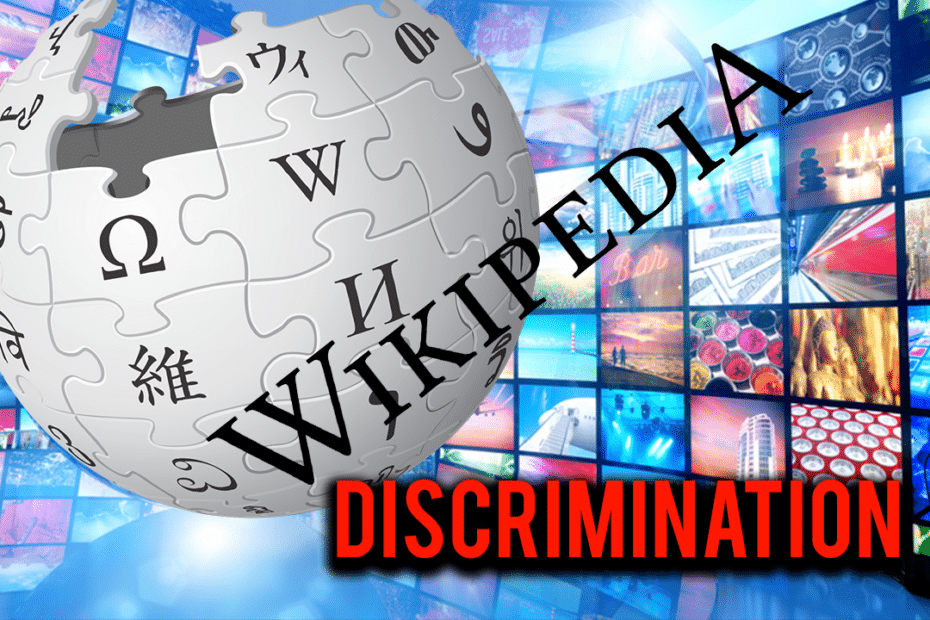 Wikipedia's Discrimination Against The Entertainment Industry And Are Not Afraid To Admit it!

I have been a long time Wikipedia user. When you do any Google search, you will get the Wikipedia results right at your page’s top. I have learned how the popular search site operates over the past 72 hours, and the information is downright scary. Blatant discrimination against the Entertainment Industry by Wikipedia

I have discovered a culture of discrimination in regards to the information that is allowed on Wikipedia. Site Administrators who display bias and discrimination, in this case, against the entire Entertainment Industry. Getting talked down to, mocked, and belittled when engaging with them.

This article will present evidence of that bias, discrimination, and power abuse by Wikipedia’s Administrators. Who are the gatekeepers of what is and what is not allowed on the popular information site. You will see conversation exchanges as well as the usernames of these Administrators and their behavior.

For me, this all came to light a mere three days ago. Running Dead Talk Live, Dead Talk News, and keeping up with my Social Media following is a full-time job in itself. The thought of having Dead Talk Live listed on Wikipedia at the very best was way down in the list of priorities for me. But followers of Dead Talk Live submitted the show to Wikipedia. What followed will have you scratching your head.

So the story begins… Soon after fans submitted Dead Talk Live for inclusion, Wikipedia Administrators rejected it, citing “Notability.” Now there’s a term that is not only subjective but open to each individual’s interpretation. The user went on to cite references to the show from publications around the world. References that include Dead Talk Live being the source for articles on Comicbook.com, We Got This Covered, Express UK, for a total of 34 total various publications citing the show for their news articles.

Below you’ll see Administrator Eyebeller state that actual video interviews with Celebrity Guests are “Not Reliable” sources, and the coverage needs to be “Significant.” There’s another subjective term. What is the threshold for “Significant”? Also, Celebrity Video Interviews are not reliable?

Regardless, there is no lack of external website mentions of the show, and as stated earlier, 34 references were submitted. After following Wikipedia Guidelines and submitting the necessary references, and re-submitting the show for review, Wikipedia inexplicably blocked the user for using his account for “Advertising or Promotion” WTF???

Here is his notice of being blocked:

Here is where it gets bizarre. Appealing the “Block” on Wikipedia, the user was accused of collaborating with me by Wikipedia Administrator 331dot. That’s right, me, John Vizaniaris, the Creator/Host of Dead Talk Live known as Viz. Check this out: 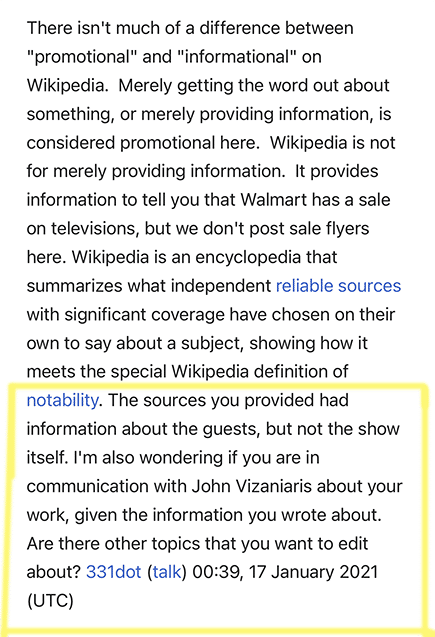 Wikipedia Administrator 331dot, concluded that I told the show’s fans to create a Wikipedia page for Dead Talk Live. No proof but hey, why does evidence matter, right? They are the gatekeepers who can say whatever they want, make whatever accusation they want, and ultimately control what the users see.

Now for the discrimination. And to be clear, I am still trying to wrap my mind around this Administrator’s lack of regard when he made this statement. Wikipedia Administrator ~ToBeFree asks if the block was lifted what contributions he plans to make to the site. Very general question, right? So, he got a very general answer in which the user is planning on contributing to the Entertianment Industry since he is very familiar with it. The response was:

“I appreciate the honesty, but that’s an instant “no” from me.” ~ToBeFree

Wow! If that is not discrimination and bias towards a specific industry, I don’t know what is! “But that’s an instant “no” from me” See the exchange below: 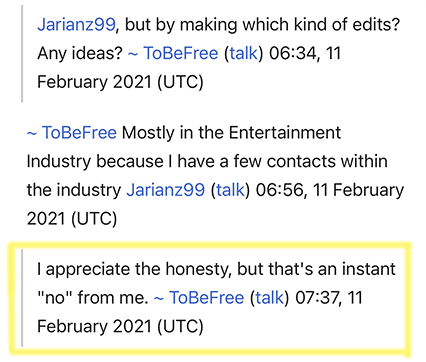 Then three days ago, I get a message from Wikipedia entirely out of the blue. I’ve had my Wikipedia account for over a decade, and it’s a spotless account. I had never received an email from them until several days ago, and was I surprised. I get an email accusing me of creating a fake account and submitting the show for inclusion. Not knowing what’s been going on prior, I am bewildered.

"I appreciate the honesty, but that's an instant "no" from me." ~ToBeFree

There is a policy at Wikipedia called “Conflict of Interest.” Meaning you cannot be associated with the topic you are contributing to. I understand and respect that policy. I told Wikipedia, I never encouraged any followers to create a Wikipedia page, and I did not create another account to get Dead Talk Live listed on Wikipedia.

Simultaneously, the initial contributor took screenshots and sent me all of his information. I looked over everything, and I had to make a decision. Since I genuinely don’t have time, do I ignore this, or do I look at the clear evidence of discrimination and bias on display by Wikipedia? I believe in the motto of “choose your battles carefully,” and after some serious thought and out of deep respect for all our show’s viewers, I could not just let this go.

Their response was to block me, just like that. Some administrator’s assumptions block a 10-year-old spotless record on Wikipedia. Of course, I appealed the block and what followed was nothing short of mocking and verbal abuse by the Administrators themselves.

Wikipedia tracks every user who visits their site by their IP Address for those who don’t know. They track and store it. They know exactly where you are, which device you are using, and who knows what other information they have on you. You have no privacy when you visit Wikipedia.

Every registered user on Wikipedia also has their own “Talk” page. This is your page, where you can ask for help, express your thoughts and opinion respectfully, get your questions answered, and so on. When Wikipedia doesn’t want to hear what you have to say, they shut you down. As of this writing, I have been blocked and silenced on Wikipedia, as has the user who initiated the process of getting Dead Talk Live listed. Who, by the way, I want to say Thank You. I greatly appreciated the gesture.

Dead Talk Live does deserve a spot on Wikipedia. In 2 months we are celebrating our 1-year anniversary. And in that one year, we have amassed 340,000 followers across five different Social Media Platforms, have welcomed over 40 Celebrity guests, and have achieved things I did not dream possible. I am proud of my team here on Dead Talk Live. And if Wikipedia has pages dedicated to “hate groups,” I most definitely think they have space for a Horror Entertainment Talk Show that has achieved so much in a short time.

If you agree with me, then I am asking for your help. As of now, Wikipedia has deleted the page for Dead Talk Live when asked for a comment for this article. In fact, as you can see from the picture, they marked it for “Speedy Deletion.” That speaks for itself.

Here is the reason my page was rejected:

If you believe that information should be allowed to flow freely and not controlled by an individual’s own bias and prejudice. Dead Talk Live has been removed from Wikipedia but if you think it deserves to be listed, anyone can resubmit it.

Wikipedia Administrators feel they can control what information the users see and do not see. A place where if you are not a member of “The Club,” you mean nothing to us. A place where Administrators are left unchecked to mock their users. Wikipedia operates on donations. Donations by ordinary people. And if these people knew what I have found out in the last 72 hours, those donations would diminish.

For the record, Dead Talk Live had no problems getting listed on IMDb. Which is the main information site for Movies and Television. The show was vetted and approved with no problems. Here is Dead Talk Live’s IMDb Listing.

Click on the links of the Administrators listed here and let them know that information should be unbiased.

I contacted Wikipedia Press for comment and, as of yet, have not received a reply.