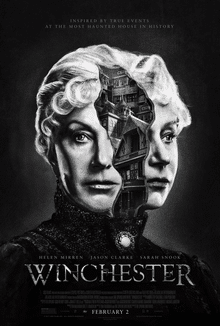 After the death of her only daughter, and later her husband, rumors spread that Sarah Winchester consulted a medium who instructed her to move West and continuously build a home for the spirits of those who died by her husband’s famed “Gun that Won the West.” Sarah did so for 36 years, constructing a 7 story architectural wonder known as The Winchester Mystery House, a living labyrinth with stairs that lead to ceilings, 160 rooms, one shower, and an affinity for the number 13. Winchester (2018) is a historical fiction horror centering around a visit from Eric Price (Jason Clarke) who has been sent by the Winchester Company to determine if Sarah (Helen Mirren) is fit to keep running the company.

Winchester focuses on Eric’s visit to the mansion in 1906, told by the Winchester Company he’ll have all debts paid plus plenty more for what the company calls a favorable diagnosis. We soon learn that Sarah is not insane in her grief, only trying to help the souls claimed by her husband’s weapons find peace so they can move on. Eric himself recently lost someone to a Winchester gun, dosing himself with laudanum to ease his grief. He attributes many of the initial ghost sightings to his addiction but they do not cease when Sarah confiscates his supply, stating that he needs “clarity” in this house. A bell tolls at midnight each night, triggering Sarah’s nephew into a trancelike state that allows a dangerous spirit to possess him. Eric and Sarah attempt to save the boy and help the spirits by recreating the rooms the ghosts died in so they can accept their deaths and find peace. 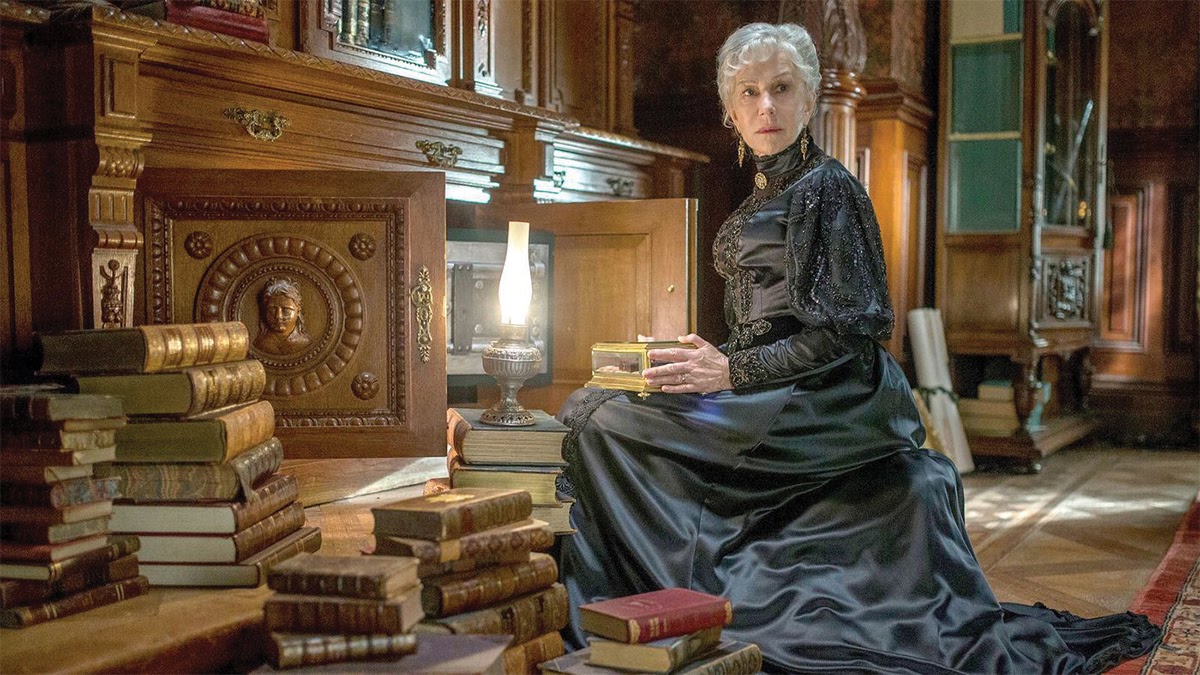 The plot of Winchester moves quickly from one plot point to the next and creates an air of confusion often found in ghost stories. While trying to determine Sarah’s mental status, Eric finds himself doubting his own sanity. He is both in a house riddled with ghosts while detoxing from a drug he’s relied on for quite some time to help him forget a painful loss that nearly claimed his own life as well. He is unsure of what is happening around him, as ghosts are not something he believes in, claiming them to be nothing more than an illusion of the grieving mind. Sarah guides him to believing and assisting her to bring the spirits peace beyond their purgatory.

The movie adequately mixes in historical facts with creative liberties to create a story that encompasses the oddity that is the Winchester Mystery House. People did speculate that the Winchesters were cursed after the passing of her family and that Sarah constructed a monstrosity based on the advice of a medium, although no evidence is found to support this theory through her surviving correspondence. The earthquake in 1906 destroyed the 7-story tower, as well as the top 3 stories, trapping Sarah in one of the rooms. She continued to build until the moment of her death when all construction immediately stopped.

Whether or not she was truly hiding from ghosts is up for debate but Sarah was remarkable in both her unique designs and the fact that she was a self taught architect in an era that did not allow women to work in such a field. Her imaginative vision that turned an 8 room farmhouse into an elaborate 160 mansion is now a landmark, with in person and virtual tours available to the public.

See the trailer for Winchester here

6 Sensational Haunted House Movies For May