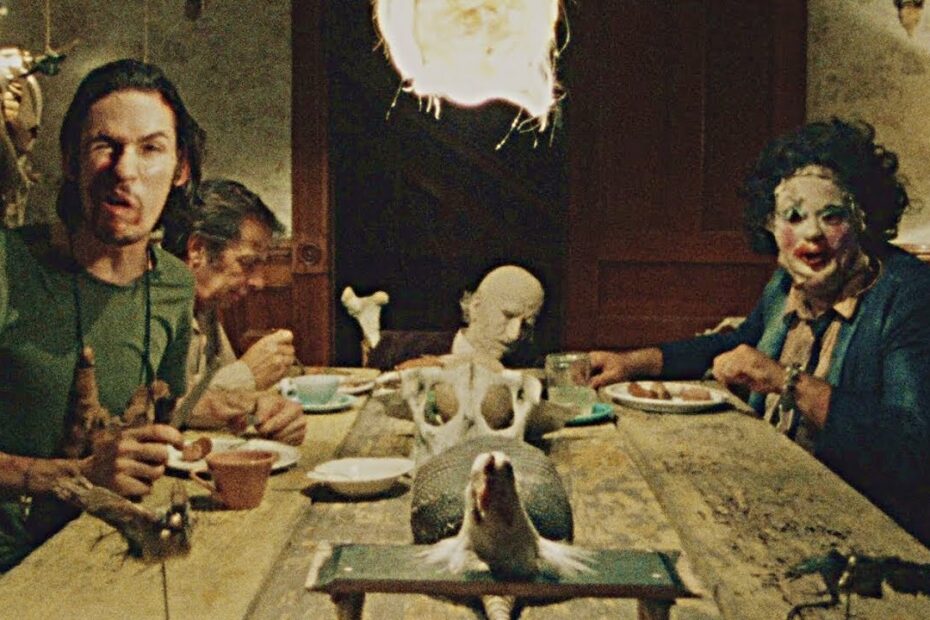 Trauma changes the brain in ways we do not fully understand yet, and many people cannot recover from their experiences. Not everyone who experiences a traumatic experience develops PTSD, but a large number can and do. Loss of control, fear, isolation, and an exhausted body all play a part in whether or not someone walks away with haunting memories of an awful event. Horror movies, like Texas Chainsaw Massacre (1974), help us see into the experiences and mindsets of the characters, who are attempting to live through the worst moments of their lives.

Texas Chainsaw Massacre, as stated above, is such a film. After the rest of Sally’s party is horrifically killed, the lone survivor dashes, blood soaked, to a road and narrowly misses being struck by a truck she flags down for help. The driver dies saving her from Leatherface and Sally jumps into the bed of another truck that drives her to safety. We see her laughing hysterically while maintaining a look of pure terror on her face. The events of those days have completely shattered her mind. The amount of trauma she has endured can have peculiar effects on the brain, often permanently, especially in her case. She was repeatedly attacked, went quite some time with no rest or nourishment, and watched her companions brutally tortured to death. Her brain was given no intermissions from maintaining a fully alter, primed for impending attacks at any moment with no warning. She had no sense of control about her situation, only oft foiled attempts to escape.

One of the causes of PTSD is being in a dangerous situation (and I think we can all agree that the situations  in the film Texas Chainsaw Massacre would certainly qualify as dangerous) that causes someone to feel powerless and have no control over what happens to them. Adding in not knowing when or if said situation will end, or what will happen during the onslaught, truly traumatizes a person’s mind, enough to be seen on brain scans. A person who develops PTSD will lose their linguistic capabilities to describe the traumatic event. They will be able to visualize it but the memory cannot be accessed with any words to describe it. This causes the memory to appear as it is happening in real time as the mental images are still able to be processed by the brain. Known as a flashback, during these moments a person with PTSD can act erratically and uncharacteristically, sometimes not remembering what happened during those episodes. 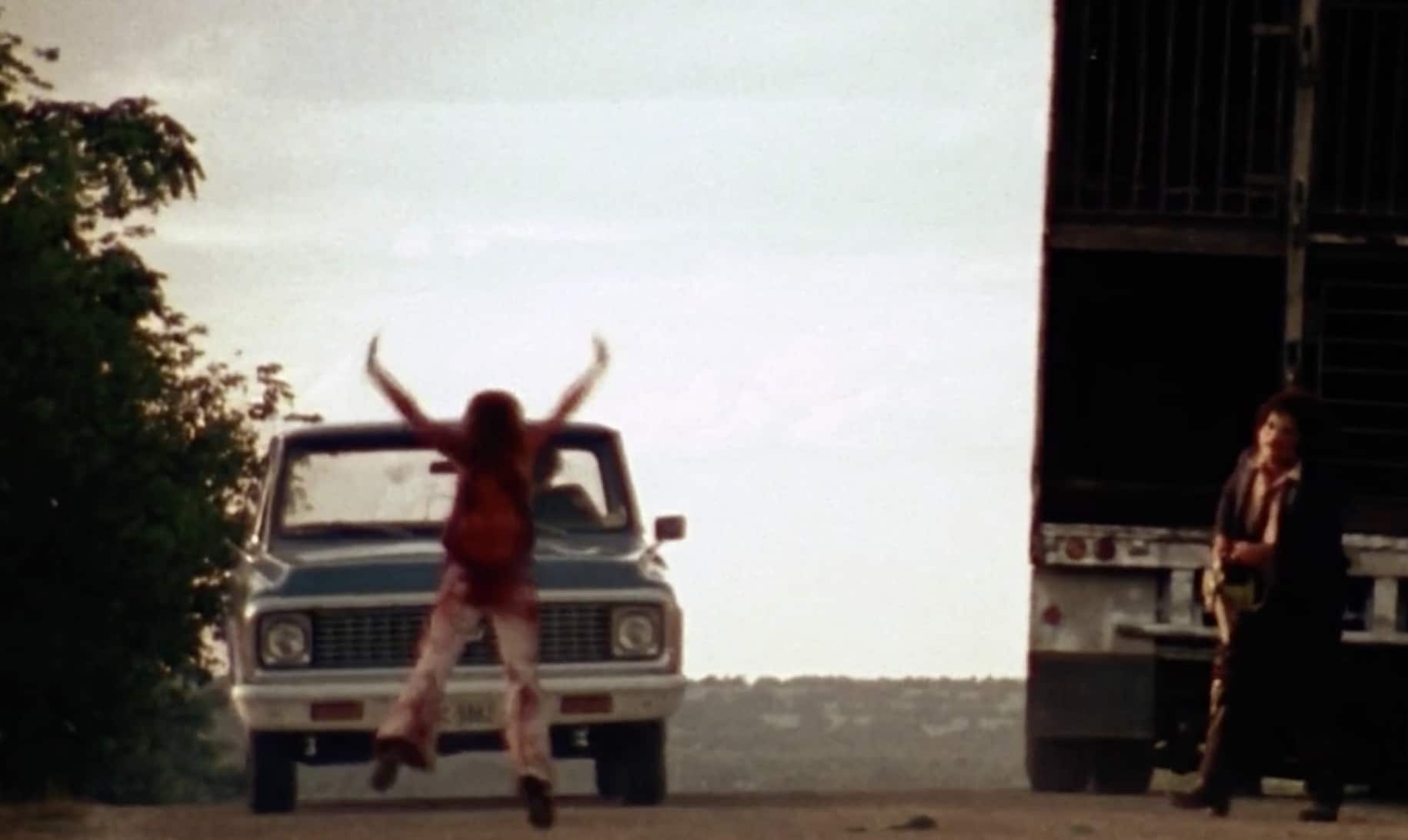 The woman we see laughing as she is being taken away from a psychopath in Texas Chainsaw Massacre  has dwindled from the rational, happy character Sally was before to one who is no longer cognitively capable of anything more than a gut reaction. Even though she and the murderer are still watching each other fade from view, she feels the first bit of hope since her arrival at the farm. She has escaped, she is on her way to safety. Her traumatized, exhausted brain can ease up on the production of stress, fear, and fight chemicals, adding in the first hints of relief and safety. The stark contrast induced Sally’s hysterical laughter. She does not just sit in the back of the truck, smiling or catching her breath or even crying; she replaces intense fear with intense laughter.

Her ability to laugh at all is strange for one who has narrowly escaped a gruesome end in Texas Chainsaw Massacre, especially since mere moments prior she avoided being killed by deflecting the murderer’s attention to the first outsider who came to her aid. She was in no way personally responsible for anyone’s death; that blame is placed solely on the villains of this story. Everyone who perished was simply in the wrong place at the wrong time, resulting in them gaining the attention of those who would end them. Survivor’s guilt is a heavy burden for those who bear it. Anyone can find themselves tearing their memories to pieces trying to make sense of why others died instead of them. Her companions were all in the same awful death trap together. They knew what was happening, but not why. The man who lost his life saving her had no idea what he had stumbled into. Up until that brief decision to stop and help a random woman, he probably was having an otherwise ordinary day.

Questioning the events that led up to her rescue, the woman perhaps would find the kind stranger’s murder to be the most difficult to comprehend. Her need to survive by reaching out to the first person she has seen not being hunted nor the murderers resulted in exposing him to the dangers that she was fleeing from. Not only did everyone outside of the farm’s residents meet a terrible end on the farm in the film Texas Chainsaw Massacre, the danger followed her off the property and swiftly laid waste to the kind soul who stopped. And, she left him there, knowing what they would do to him after he died. The “what-ifs” surrounding that moment will likely haunt her conscience the rest of her life even though all she was trying to do was ask for help.

What we see in those quick last looks at the sole survivor of Texas Chainsaw Massacre are a glimpse at her new nightmare: her mind has shattered beyond repair. Her physical injuries may mend within months, but the person she was before most definitely died. We learn in sequels she lived a relatively long life in a private hospital until her death, indicating that perhaps she was too traumatized to recover enough to live out her days independently, or even with the care of family. After her hysterical laughing fit, the audience does not hear her speak again. Perhaps Texas Chainsaw Massacre ended before we had the chance to hear her or maybe ending the story with a character who could only respond with terrified laughter is indicating her verbal capabilities for the remainder of her life.

The mind can try to protect itself by wrapping itself up in a comforting cocoon and not allowing bad memories to be acknowledged. Sometimes it can even replace the outside world with a preferably peaceful faux inner reality. This woman could have easily shut down entirely, leaving her mind blank and her body catatonic. Trapped in such a fashion, she may have never emerged as her brain was too heavily traumatized to repair. Her story in the fictional world of Texas Chainsaw Massacre is truly one of pure horror, as she can never escape the damage those experiences caused her. She has no choice but to live with the dire consequences of other people’s actions, with no other survivors to relate to. She is forever isolated in that regard and in her trauma.

Check out the trailer for the original “Texas Chainsaw Massacre!”

previousBobby Naderi, Dead Talk Live Show Postponed
nextAgatha Christie’s AND THEN THERE WERE NONE