Home > The Untimely Deaths of Hill House and Bly Manor 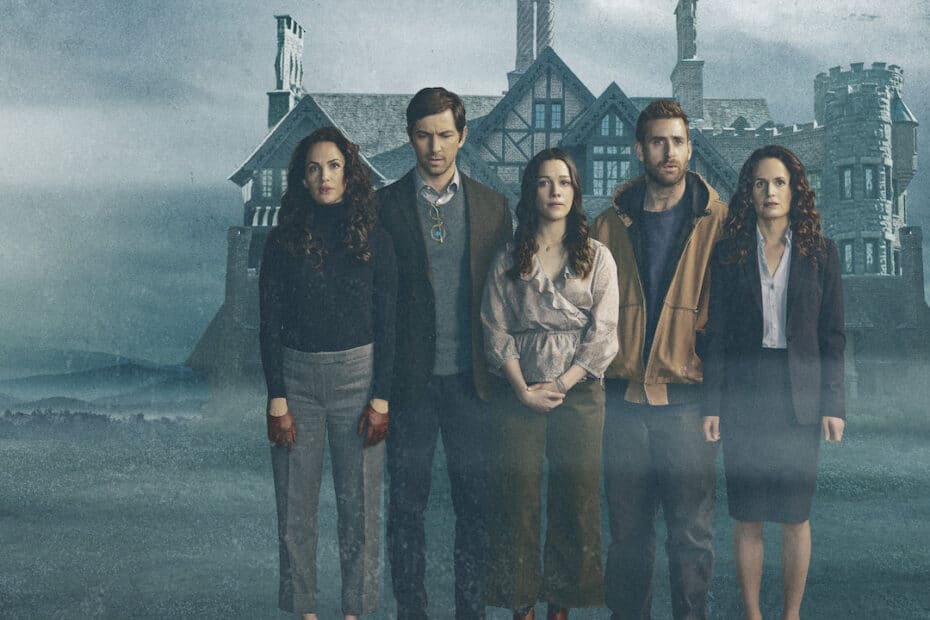 Ghostly murders in “Hill House” and “Bly Manor”only appear to be suicides...

What we perceive to be is not entirely what there is to see. Both The Haunting of Hill House (2018) and The Haunting of Bly Manor (2020) muddy the waters of the circumstances surrounding the deaths of its characters. Olivia, Nell, Rebecca, and Dani all appear to die via suicide but are caught up in the trickery of the supernatural. The living struggle to understand their motives, as they cannot see the full picture of each character’s death, only the outward appearances left behind.

Olivia is the first to die in Hill House. She has been flickering through time in a sense, confusing the house’s supernatural power as sleepwalking through dreams. Between migraines, unexplained occurrences in the house, and a young daughter with night terrors, Olivia originally brushes everything off as stress. The house slowly engulfs her into a walking nightmare, that shows her moments from her past/present mixed with horrific futures depicting the deaths of her grown children. Olivia ceases to be able to distinguish between reality in present time and the nightmare fuel the house uses as an accelerant to her death. When a ghost begins to walk and talk with her, they form a strange bond over the horror of losing their children. The ghost coaxes Olivia to drink poisoned tea with her children to wake them up.

In The Haunting of Hill House, Olivia has lost the ability to tell delusions of the house from rational logic, believing the only way to protect her and her family is to kill them. She even invites the caretaker’s daughter to join their tea party, who is the only one to die via the drink. Olivia chases her fleeing family and appears to willingly jump to her death. The children grow up coping in their unique ways with what they all came to accept as a suicide inspired by mental illness. They do not realize the symptoms they look back on are really trucks by a house that Olivia fell victim to. She bought into a reality that was confusing and terrifying in it’s detached presentation. What came across as Olivia disassociating or falling into psychosis was really the house hypnotizing her, trapping her in a distorted presentation of reality she would not have otherwise willingly walked into. The house convinced her over months of death was waking up to safety and convinced her to jump.

Nell also was tricked into her death. She went back to Hill House as a way to confront her lifelong fears. The ghost of her childhood never left her, terrifying Nell for decades. As she walks the house, she does not see the house in shambles. Instead the house dresses up for Nell, presenting her with a vision of her wedding day surrounded by all her loved ones. Her dead mother and often absent twin brother are present as well. As Nell dances with her long dead husband, all seems swell with her. The halls flash between what Nell perceives is happening and what is really happening. She does not realize she is dancing in the dark hallways of a dilapidated mansion or that she celebrates alone. As Nell walks with Olivia in The Haunting of Hill House, to the top of the massive staircase looking over the bright festive reception, Nell has no idea a noose has been wrapped around her neck instead of a necklace nor does she realize she is on the ledge of the balcony until it is too late. She turns to seek answers from Olivia who only states it is time to wake up a mere moment before pushing Nell to her death. What appears to be the suicide of a distraught woman was really a murder via ghost. Nell went into the house to face her phobias and find peace. She was not going there to die; she was murdered. She watches her family argue over the circumstances of why she did this to herself and them, unable to explain she did not have a say in her death and soon they might not either.

In Bly Manor, Rebecca is tricked by a ghost into ending her life, much like The Haunting of Hill House. Her lover Peter is killed by the ‘Lady of the Lake,’ doomed to be trapped forever in Bly Manor, slowly being erased into obscurity. True to Peter’s possessive nature, instead of warning Rebecca that she too will be trapped if she dies in the house, he convinces Rebecca to stay with him forever. When she agrees, Peter possesses her and drowns her in the lake. Rebecca is horrified that what Peter promised her does not come to be, as they both are routinely compelled to walk off “tucked away in a memory,” isolated from each other more frequently. Rebecca did not realize the eternity that awaited her that she was sold on was all based on Peter’s selfish lies. He did not want to be alone with his horrible memories so he promised her a fairy tale reunion he knew he could not deliver. Brief moments to be together were enough for him to trick her into ending her life.

The main character of Bly Manor, Dani, willingly chose her fate, but not because she wasn’t aware of the consequences. Dani knew she had no other option to save the children than to sacrifice herself instead, to willingly join the  Lady of the Lake to protect the others and stop the cycle. Hugh from Hill House also was a sacrificial death, as he was bargaining his life for the safety of his remaining four children. Both would not have made their choice if there was another option. They wanted to protect their loved ones and help stop the prompting factor. The Lady in the Lake was able to stay asleep with the company of Dani, who chose not to walk and released the long trapped souls. Hugh was able to stop people from entering Hill House for decades after it took his wife Olivia, giving up his remaining years to appease the house and be trapped within its walls, with his wife and daughter.

Kurt Vonnegut of Slaughterhouse-Five states “people whose mental diseases couldn’t be treated because the causes of the disease were all in the fourth dimension, and three-dimensional Earthling doctors couldn’t see those causes at all, or even imagine them.” This quote seems accurate for the deaths in both series. The victims succumbed to forces beyond their comprehension, trapped in the realization of what truly befell them, but removed from communicating their plight, even as a warning to their loved ones. The still living characters cannot quite piece together the true tragedy that befell the dead. Only Dani and Hugh are able to transcend the two realms and create a solution that saves the living from sharing a similar fate, at the expense of their own lives. They gave up their own safety and remaining years to help even when help seemed impossible.

If you are looking for truly haunting stories the empathize with such haunted tragedies, then the powerful series of The Haunting of Hill House and Bly Manor are worth checking out.

Check out the trailer for “The Haunting of Hill House!”