Home > “Us” and “Get Out” Take Horror To The Next Level

“Us” and “Get Out” Take Horror To The Next Level "Get Out" and "Us" are horror films with powerful messages.

In both of Jordan Peele’s horror masterpieces, Get Out (2017) and Us (2019), the messages seem similar, since they are made by the same person. But, they are also unique in their own right. From having soft openings to eventually having the plot go downhill in frightening ways, to one having a race focus to the other one having more of a class focus, to having supernatural themes to keep the hand grabbing for more popcorn… both films deal with injustices in our society.

In Get Out and Us, the openings of the films seem hopeful for the main protagonists; they are living happy lives. In Get Out, the protagonist, Chris Washington (played by Academy Award Winner, Daniel Kaluuya) is living the good life along with his live-in girlfriend, Rose Armitage (Played by Alison Williams). When they are invited to a weekend at Rose’s parents’ house (Rose and her parents are all white and Chris is black), Chris is uneasy about attending because he is worried about how Rose’s parents will treat him because of his race. While at the house, things seem peaceful, but they are almost too peaceful for Christopher. He soon discovers that the family has all-black servants. While investigating the Armitage homes, he picks up on the odd behavior of the staff. Things however take another bad turn for Chris, when a party gets heated because of the ignorance of Rose’s parents, who passive aggressively throw racial stereotypes into the dinner conversations. Things take another turn when one of their servants comes running to the party with a bloody nose and yells to Chris, “get out!” The movie then goes darker, and there are more secrets revealed that will eventually help Chris “get out” of this horrible home life, and hopefully take down the Armitages and their legacy for good. 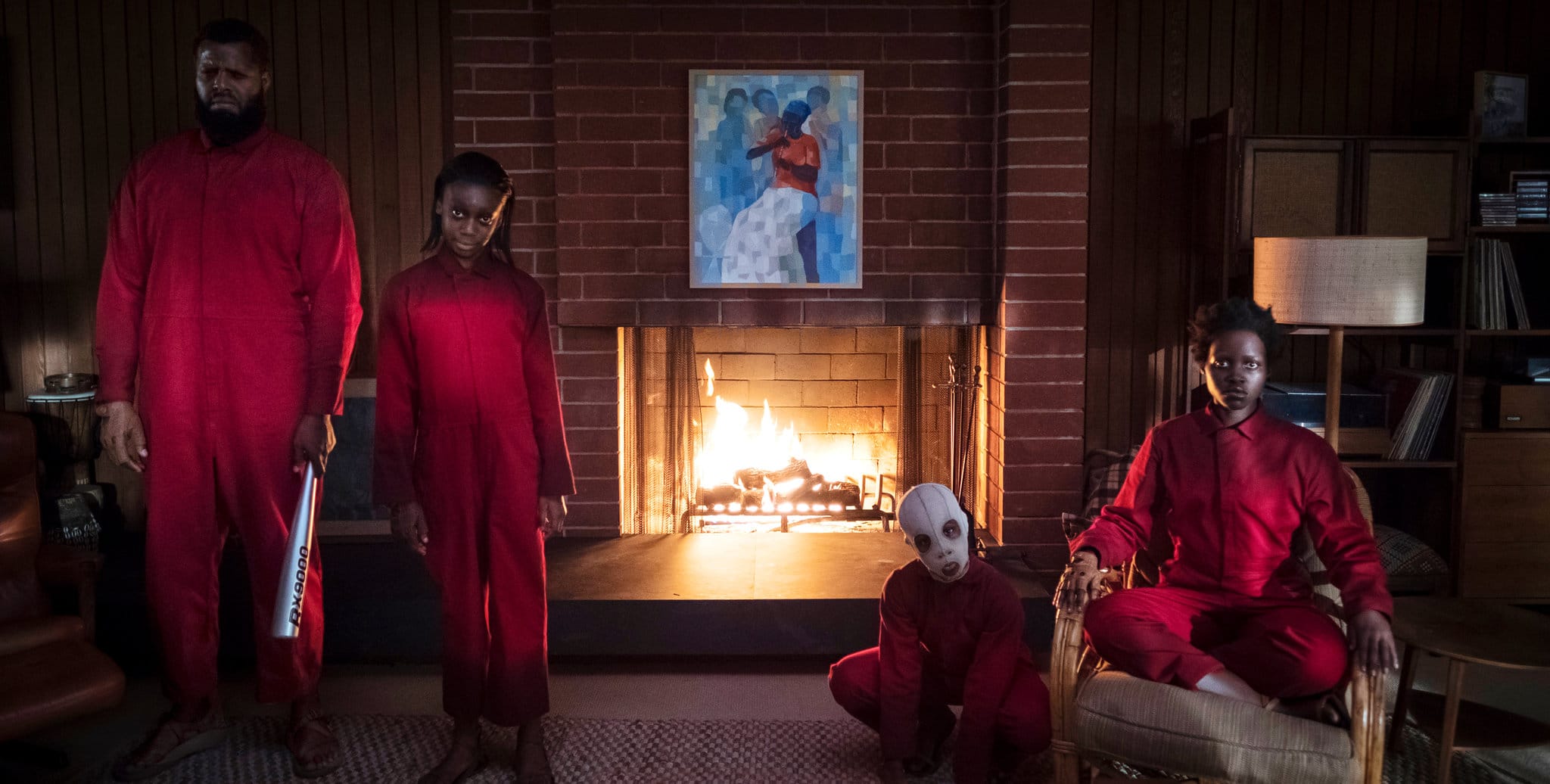 In Jordan Peele’s Us, however, this film is focused on a family, rather than just one person, like in Get Out. Much like his previous film, Us also starts in a tranquil way of living. While on a serene getaway to get away from their busy lives, the Tylers go to their mother, Adelaide’s childhood home. While the Tylers are there, their peaceful vacation turns into a dark, twilight zone type of chapter in their lives. When the Tyler’s are asleep, Adelaide’s childhood home is broken into. When the family is woken up, they all go to see who is breaking into their home, but what they soon see is dopplegangers. Adelaide is taken aback because in her childhood, her doppleganger terrorized her as a child, so much so that she considers it a traumatic experience. Not only is Adelaide’s doppelganger back to haunt her, but her new family of doppelgangers are back to terrorize the rest of Adelaide’s family, as well. Throughout the movie, the Tyler family needs to think of a way to beat the dopplegangers, so they can get home before it’s too late.

Another theme that is picked up on during the watching of these two films is how it deals with class issues versus racial issues. In Get Out, the focus of the film is specifically on race. It deals with the horror of Caucasians targeting African Americans, to be able to use their bodies to live longer and healthier lives, which is pretty horrific. In Us, however, the film is more focused on class. The Tylers live on the surface, while the dopplegangers, or their clones, live below them in the tunnels. The dopplegangers want to live on the surface and have the humans live underground, due to their idea that they are better than the humans, and they deserve to live above ground more than the humans do.

Next, both of these movies have supernatural themes, but they are brand new to the genre of horror, so no ghosts or demons. In Get Out, the supernatural idea in this film is the idea of not being able to control one’s body after hypnosis and surgery. In Us, the supernatural horror idea that Jordan Peele uses is the concept that we all have doppelgangers, or people that look exactly like us, planning out the way we are going to die. These are not like other horror films, where a supernatural element is something like a ghost or a demon, but rather it has to do with how someone wants to control your mind or your life.

Lastly, in both of Jordan Peeles’s movies, the number of people affected by the antagonists of the films differs. In Get Out, only a few people are affected, mainly the victims of the Armitage’s trickery, due to the family’s secret racist ideals. While in Us, every single person is affected, due to everyone having a Tethered (doppelganger) counterpart.

With both of these films in mind, we can see how they different, but also how they are brilliantly similar, too.

Take a look at the trailer for “Get Out!”

previousElements of Horror: What Makes A Scary Movie Scary?
nextMy Heart Can’t Beat Unless You Tell It To, A Review