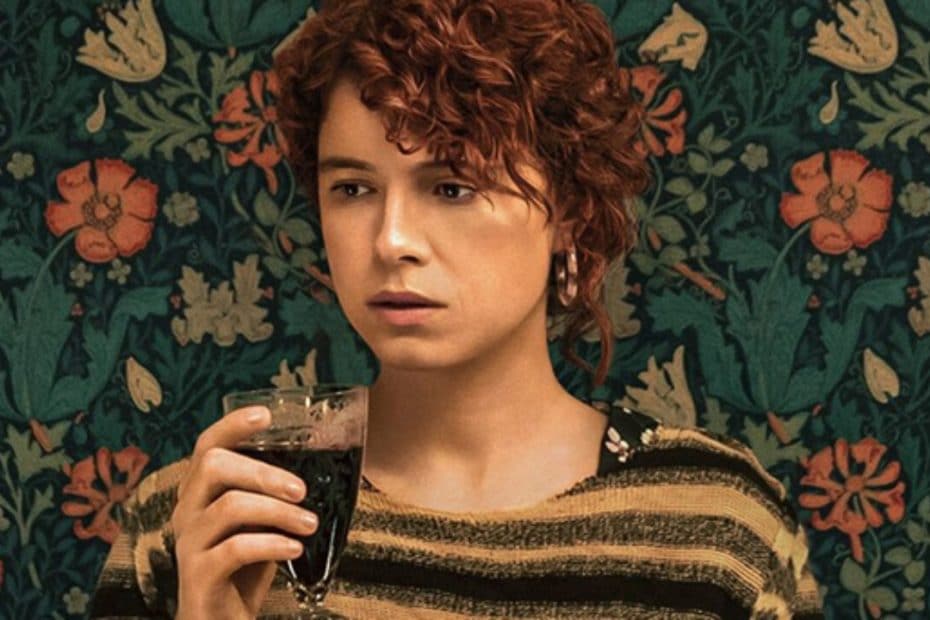 The World is Larger Than The Inside of Your Own Head

I’m Thinking of Ending Things is a psychological thriller that manages to make art out of awkward conversation. A couple embarking on their first road trip together, a brief visit to Jake’s parents house, begins with the woman monologuing her thoughts on ending things as the camera pans around an empty house. We soon realize ending things can mean anything or perhaps nothing more than a musing.

While describing movie dialogue as awkward is typically not a plus, this was the main appeal of I’m Thinking of Ending Things for me. The script is crafted to showcase how limiting polite conversation can be with unengaged speakers lost in their own thoughts only to be interrupted by empty conversation attempts that go nowhere, reminding them of how they feel alone next to the one they love.

There is a cold distance between the girl and Jake that transitions fluidly from the on edge nervousness of a first date to the type of loneliness one feels at the end of a relationship long past it’s expiration date, trying to revive dead love with the idle, apathetic chit chat. Yet when the characters expose their hidden selves, the script utilizes sensationally dark poetic monologues that encompass the secret inner dialogue of the character in a fashion that also speaks volumes to the human condition. Their morose personal statements span beyond the character, speaking to the isolation, passion, hopes, lost dreams and loves that make up the essence of who they are and the acts of kindness they are remembered for.

There is a deep seeded kindness within each of the main characters, but somehow each are viewed or view themselves as outcasts. They all have personal struggles and perhaps don’t interact as patiently as they could, coming off cold or enraged. They’re not always accepted or perceive themselves to be accepted by others, perhaps at times only tolerated while not being particularly welcomed.

The people who don’t know them are shown to judge them on their awkwardness and appearance and not the person they are. This is shown with the dialogue and cinematography. Each of them want to be seen, to form a lasting human connection that spans the ages similar to the old musicals Jake enjoys where everything ends on a high note. Mentions of long dead poets and philosophers encompass the heart of the character’s ideals and struggles kept alive by the sentiments of these old words due to their astute sentiments. The characters are shown at times to starve for genuine human connection, even when sharing a simple feast with loved ones. The stark contrast between the cold isolation of the car ride, wondering where to find junk food to sustain them along the way, compared to the warmth of a family dinner with plenty of wholesome food.

The aesthetic of this movie is quite spectacular, the snowy, rural landscape highlights the persistent theme of nostalgic loneliness that follows through to the end. The film progresses in an inspired linear fashion with flashbacks subtlety achieved through creative lighting techniques and camera angles. As the characters converse, their mannerisms and ages change as fluidly as their discussions, creating moments where all the people they were and have yet to become emerge to be seen and heard only to flicker away again. The life of the conversation waxes and wanes as their different aged selves appear, adding the context of age to the discussions. The way the camera follows the girl as she’s experiencing her boyfriend’s childhood home for the first time beautifully creates a familiar yet unsettling strange aesthetic of one walking through a memory. 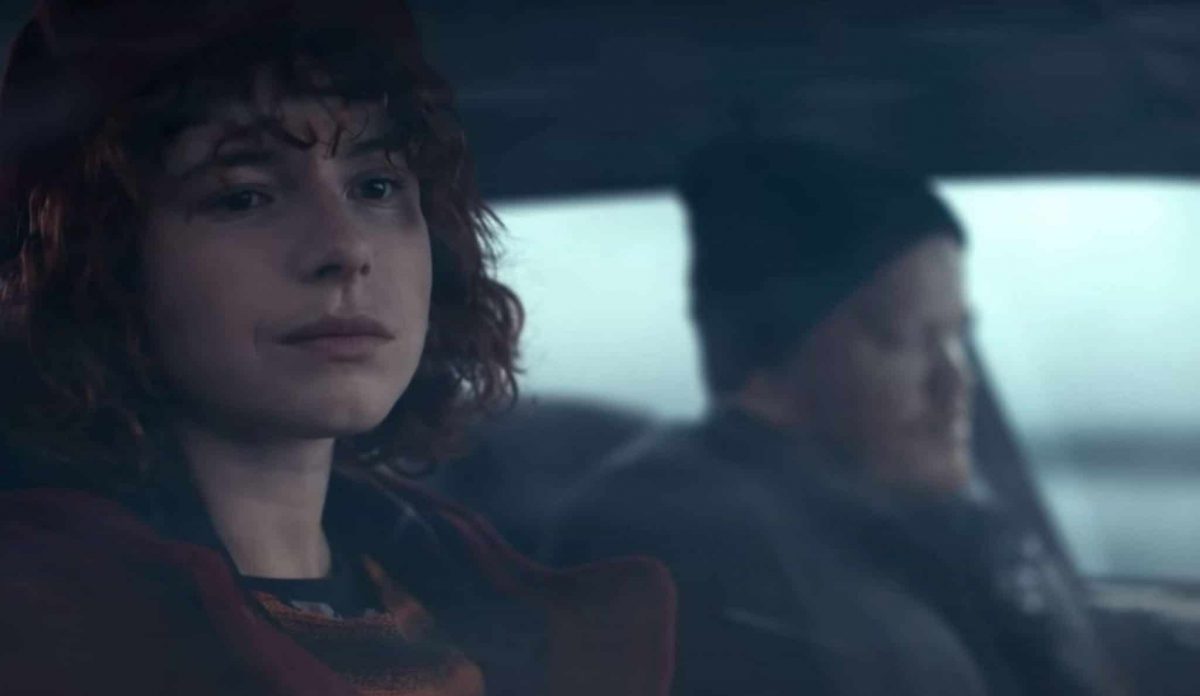 This film is phenomenal with how it portrays the lifespan of a person, who and how many people we become within one life all contained within the same physical form. A seemingly simplistic conversation can turn from humdrum to astonishingly poetic quickly. The way the camera pans to show characters suddenly alone, as if lost in a thought when they themselves are the thought is masterfully done to achieve the overall plot. The quiet musings of one’s inner mind walking through memories spring out in various forms, from muffled voices to pointed vacant stares to silences that speak volumes. The characters wander through memories, real and daydreams, themselves a collection of walking memories imprisoned in their autopilot bodies carrying out their normal routine, unenthused with how life turned out so differently than how they imagined it.

The couple are characters to each other in a way, little moments collected over a brief relationship that occasionally gets dusted off and revisited. Jake rewatches old movies and daydreams about a different life as he goes about his janitorial duties in his old high school. He is shown to have the same amount of interaction whether he works during the school day surrounded by students or alone at night. He watches people, simple as that. He watches them interact with each other in the halls of his school, he watches them grow up and become different people as they mature. He watches movies and watches his memories, both his highlight and blooper reels. His girlfriend is shown to be constantly narrating dreary poetry in her head that focuses mostly around time, personal connections, and a strange mixture of apathetic enthusiasm.

Jake’s parents are interesting both as individual characters and in how they interact with each other. We see their whole life span flickering intermittently after dinner, from their youngest married days to their final moments. When one is shown old and frail, the other is in a much younger role, the contrast highlighting the lastibility of their relationship. The father is shown to have dementia in his older years, while the mother in another room is shown to be collecting laundry in her prime years. Later when she is in a hospice bed, the father is shown in his prime, taking care of repairs around the house. They can rely on each other as well as enjoy each other’s company during the good times. They can grieve the people they once were and once loved while still appreciating the person before them in present moments. Jake is shown to be unable to acquire such attachments with others, fulfilling his need for interaction by walking aimlessly through old memories with the similar characteristics of his elderly father. Jake is unfortunate that he did not end up with his beloved Lucy, as she is a creation of his imagination regardless of if they actually met or not. He has taken the memory of their brief awkward initial interaction and spanned an entire relationship, caught in the never ending movie of his mind’s eye, nothing more than a faux relationship to dull the pain of a lonely existence.

I’m Thinking of Ending Things is a wonderfully written and beautifully acted elaborate metaphor that eloquently portrays the vast experiences of a single person and the many people they become throughout their life. It is currently available to stream on Netflix. 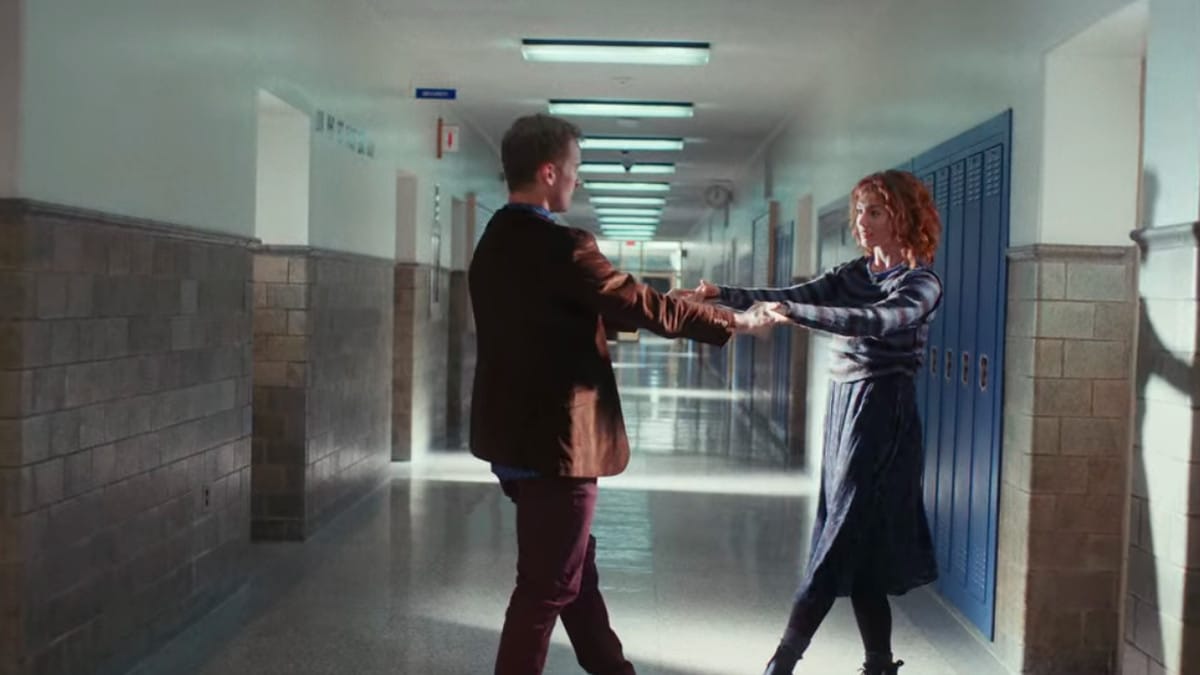