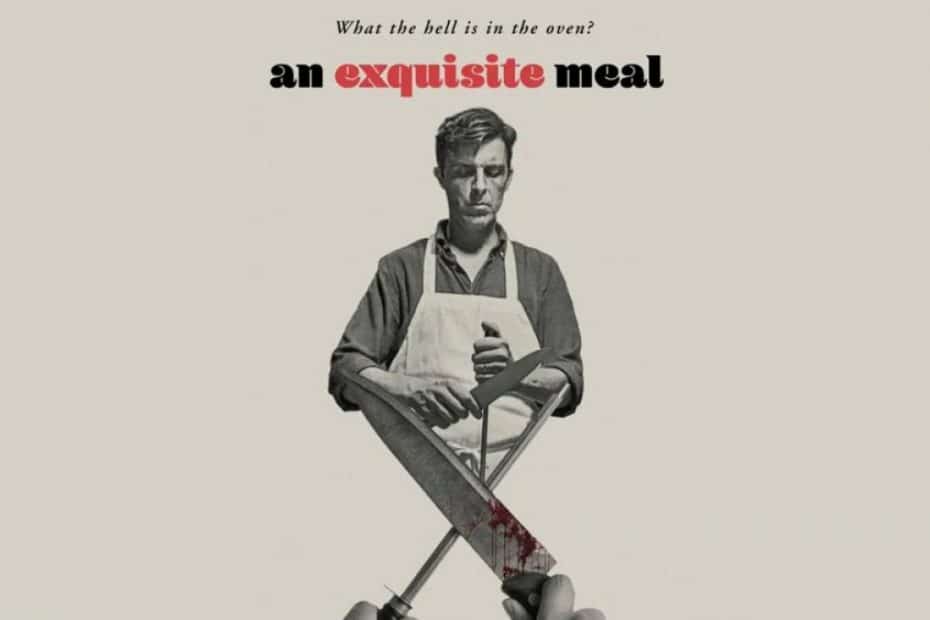 When a Dinner Party Goes Wrong

An Exquisite Meal is described as a sharply satirical genre-bending journey through one absurdly terrifying dinner party in modern America. It’s a darkly playful Buñuelian nightmare that’s full of punchlines and twists.

The most notable thing that stuck out to me immediately is that this film is centered around the setting of a house dinner party. This reminded me of two specific movies: the 2012 film Would You Rather and The Office’s season four episode appropriately titled “Dinner Party”. An Exquisite Meal is only an hour long and interestingly uses Roman numerals I – V to express the film’s timeline about every ten minutes.

To quickly summarize, a couple named Dave and Irene are hosting a dinner party for their friends Beth, Mark, Annie, Paul, and Edward. Dave keeps insisting that he is preparing “an exquisite meal”. Their guests must wait a long time for the dinner to be ready, so they talk amongst themselves to pass the time.

It is clear that Dave and Irene are doing their best to be good hosts. Paul is a strange neighbor who is only invited in because he is close by. Annie shows up late and Edwards shows up instead of another expected friend. Beth and Mark are shown to be a troubled couple.

Dave and Irene mirror the relationship between Michael and Jan. Dave wants to impress their friends, though Irene seems to have stress put on her by hosting and being with Dave.

There is a good amount to like about this movie. The acting comes off as bad, but I had to remind myself that it is meant to be satirical. The plot is also somewhat confusing, but it is supposed to be. Their conversations are inconsequential and go random places,

While watching, I believed that the movie would go a certain more slasher like way such as The Texas Chainsaw Massacre but more meta, however it did not. To be fair, that would have taken away from the dark humor and more thriller moments rather than becoming more horror/scary.

This movie does a good job of building tension. You are following the dinner party, but it is very unpredictable. There is a twist that even eagle eyed viewers may not be able to guess. None of the events are predictable.

Overall, I was entertained, but confused for an hour. I suggest watching this film if you like obscure thrillers/ dark comedies. An Exquisite Meal is available for streaming on Amazon Prime, Vudu, and iTunes.