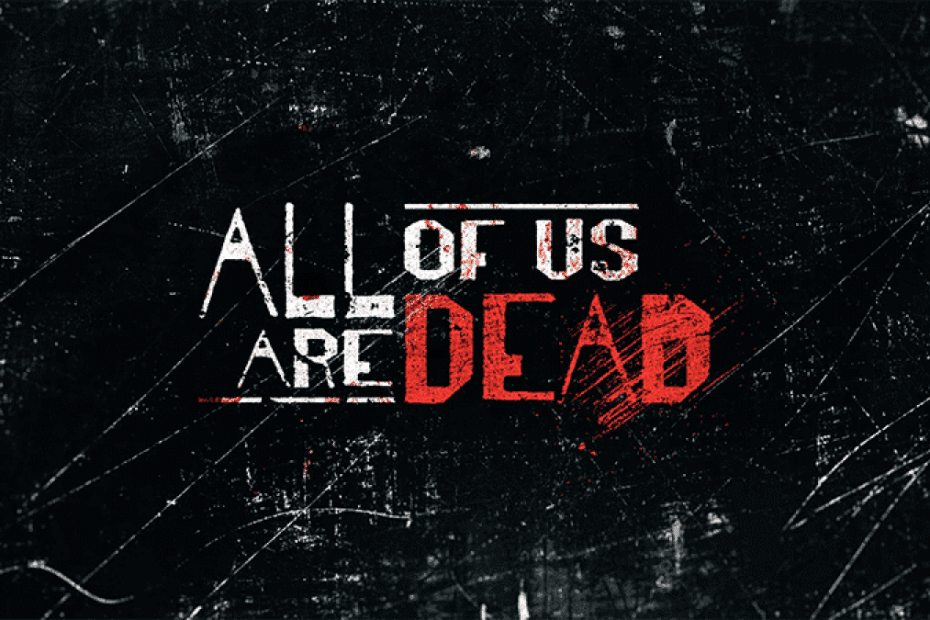 "All of us Are Dead" is Apocalyptic Yet Relatable

When one thinks of All of us Are Dead, the first word that comes to mind isn’t ‘scary’, it’s ‘crazy’. The Netflix horror drama set in Hyosan High School, produced by JTBC Studios and Film Monster, is one of the first zombie apocalyptic television series to be aired in 2022 aside from The Walking Dead and iZombie. With fans buzzing all over Twitter since it’s release, it’s no wonder the Korean series has become an instant success.

From its title All of us Are Dead, most viewers expected a post apocalyptic intro – the same type you find in Army Of The Dead (2021), Residential Evil (2002), and Daybreak (2019), but it actually starts with a perfectly normal day. Teens are going to school, boys are crushing on girls, and mothers are still teasing their sons about chicken. The audience doesn’t even suspect something bad is about to happen. It takes almost a full hour before we witness the first infection at Hyosan High School and all hell breaks loose.

The series of 12 episodes gives us a chance to see first hand what happens when a potential pandemic is discovered. Like Covid-19 and others before it, most characters couldn’t understand what was happening – How a school girl gets infected in the science lab of Hyosan High and somehow begins to bite everyone she comes in contact with. In a public school of that size, it doesn’t take long before most of the teachers, students and others get infected. Yet, the scariest part of this Robert Kirkman creation is that, unlike Covid-19 which takes up to two weeks before symptoms surface, this virus kills its host within five minutes and sustains the walking corpse by consuming human flesh.

The plot of the entire story rests on the students of Hyosan High School and their attempts to survive the zombie apocalypse. Most of their friends die, an English teacher, a father and a shop owner among them, but these students strive on. Romance, suspense, humor, freight, and shivery are not lost in the mix as we follow the horrors of man’s creation.

All of us are Dead reveals a list of real life heartbreaking events which understandably leads to the creation of the zombie virus. Issues like bullying, manipulation, and suicide stand out sadly as major themes in this story and emphasize the possibility of a viral infection like this one happening in the real world.

The first episode of All of us Are Dead affirms a well-known fact that bullying exists and depicts it in its most heinous form. A girl is coerced into stripping out of her school uniform in an uncompleted building while another student records. The bullies schedule to post this recording on social media for no sane or apparent reason and torment the girl bad enough that she contemplates suicide. She goes up to the school’s roof and is about to jump off when the outbreak begins. She eventually becomes willing to sacrifice her humanity just to destroy the video recording but is unsuccessful. 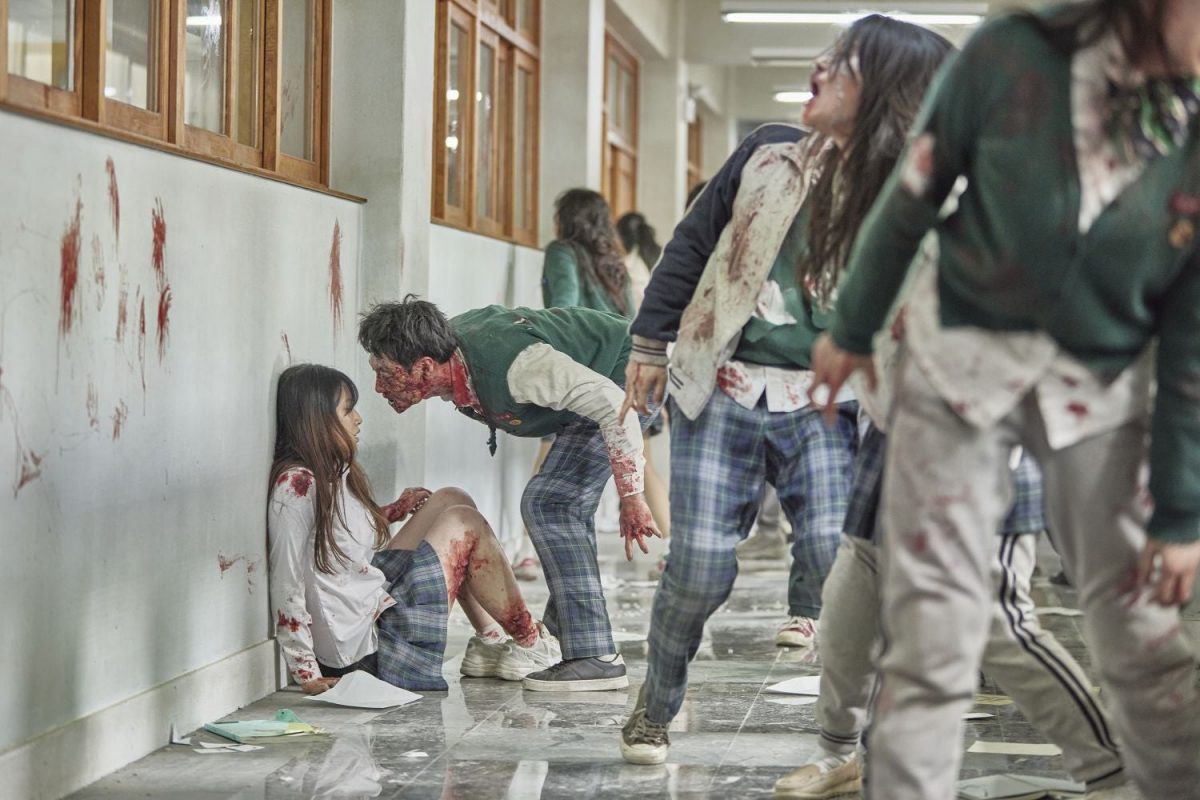 We also see bullying surface in the creation of the zombie virus we come to know as the Jonas Virus. Having watched his son get bullied daily even to the point of broken bones, the school’s science teacher develops a virus he believes will make his son more aggressive to fight off bullies. This virus eventually ends up killing the boy and turns him into a flesh eating walking corpse; the first infected.

In hindsight, we discover these incidents of bullying have been reported to the school authorities but they cast it aside as “kids playing with each other” or blame those who report as being solely responsible for their injuries. All of us Are Dead introduces a different horror story from what we are used to. The Jonas Virus doesn’t come to be by accident or the melting of glaciers like we see in V Wars (2019). It is created as a response to bullying.

Again, this is one of the few horror stories that doesn’t just focus on the cannibalistic nature of the virus or the fact that it has no cure. It also highlights man’s selfish willingness to survive. We see survivors get stoned by a neighboring town as they try to escape the flesh eaters in Hyosan. Not unlike what happens in the real world, neighbors of Hyosan are willing to let everyone die of the virus rather than allow a single survivor to come into their city.

At a refugee camp in a later episode, we see Hyosan citizens locked together in a small single room. The food isn’t great and survivors must struggle everyday among themselves for the simple resources and space they should get freely. The Marshall law officer in charge is also willing to let the students of Hyosan High die on a roof top and bomb the entire town rather than rescue the few survivors that remain. Like I said: Crazy.

In an interview with The Korea Times, the director Lee Jae-kyoo concluded by saying:

“At first, you might think how cruel those kids can be. But as you get through the episodes, you will see that some of the elements run parallel to this society… I hoped that the series could offer viewers a chance to reflect on where they stand in that society”.

By the end of the show, All of us Are Dead had an 83% approval rating from it’s many reviews. One fan even posted on Twitter:

“All of us are dead made Train to Busan look like a nursery rhyme and Game of Thrones look like a joke. The episode 11 ending is just mind-blowing. Government wiping the citizens off like… “. 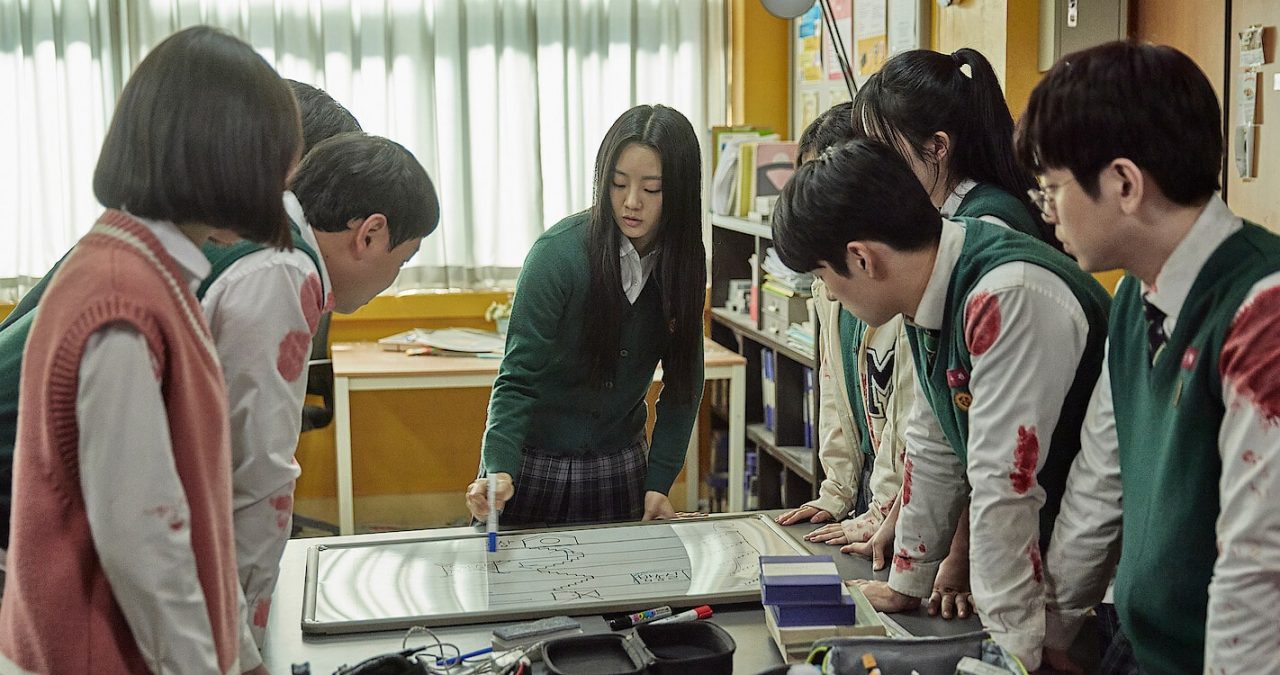 All of us Are Dead (2022) Official Netflix Trailer 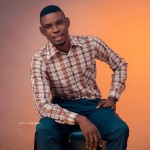