Whether it’s Patricia, Dennis or Barry, James McAvoy’s “split” character Kevin Wendell Crumb is always “on the move” as Hedwig says in this controversial M. Night Shyamalan film. Putting aside the fact that Split severely misrepresents real-life dissociative identity disorder (and understandably why some wanted it taken off of Netflix because of that), the movie disturbs viewers in a different way than other thrillers.

Every moment, you’re on the edge of your seat, wondering which personality will emerge. Apart from McAvoy’s highly skilled switcheroos, the real fear is watching three imprisoned teenage girls try to escape more than 20 different “people” living inside one grown man.

You’ll wonder just how bad this is going to get, which personality could become violent, and more importantly, what’s going to happen to the three victims. In certain moments though, you might actually find yourself suppressing a laugh. But how could you? This is a story about three kidnapped teenagers and one person who is struggling with his condition. Let’s look at some of the most dominant personalities.

For starters, looking at the youthful Hedwig “alter,” as Kevin’s therapist, Dr. Fletcher (Betty Buckley), calls it, he’s a 9-year-old boy who has a crush on Casey (Anya Taylor-Joy). Obviously, it would be less disturbing to watch an actual child try to kiss her than watching an adult do it. However, Hedwig lives within Kevin, and Casey is aware of who she’s talking to but her fear still emanates through the screen. You want to look away as Hedwig leans in while she remains completely motionless. This one scene leaves the audience holding its breath, hoping that Kevin’s childlike personality won’t do anything worse.

Despite this, here’s where you might find yourself giggling for a split second (no pun intended): Hedwig later brings Casey to his room to listen to rap music. Once again and thankfully, that’s the extent of it. When you see McAvoy awkwardly rock out to the song though, it’s hard not to giggle in the slightest. And then, Shyamalan allows a new discomfort to take over once Casey finds the walkie talkie. How much longer will it be before Hedwig “leaves” and another identity takes over?

We also meet Patricia, a managerial English lady who seemingly won’t hurt Casey, Marcia, and Claire. We’re first introduced to her when we hear that excruciatingly creepy first line, “I have your meal, sleepyhead.” Try to sleep without thinking you’ll wake up to that! She brings the teens into a room and makes them something to eat. It seems simple at first until she suddenly slams a knife down on the counter, startling everyone. But it’s all good — she’s just annoyed at herself for not cutting a perfectly square sandwich. And this is precisely what keeps the audience shifting in their seats, asking whether any of the identities will actually harm the girls that Dennis kidnapped. 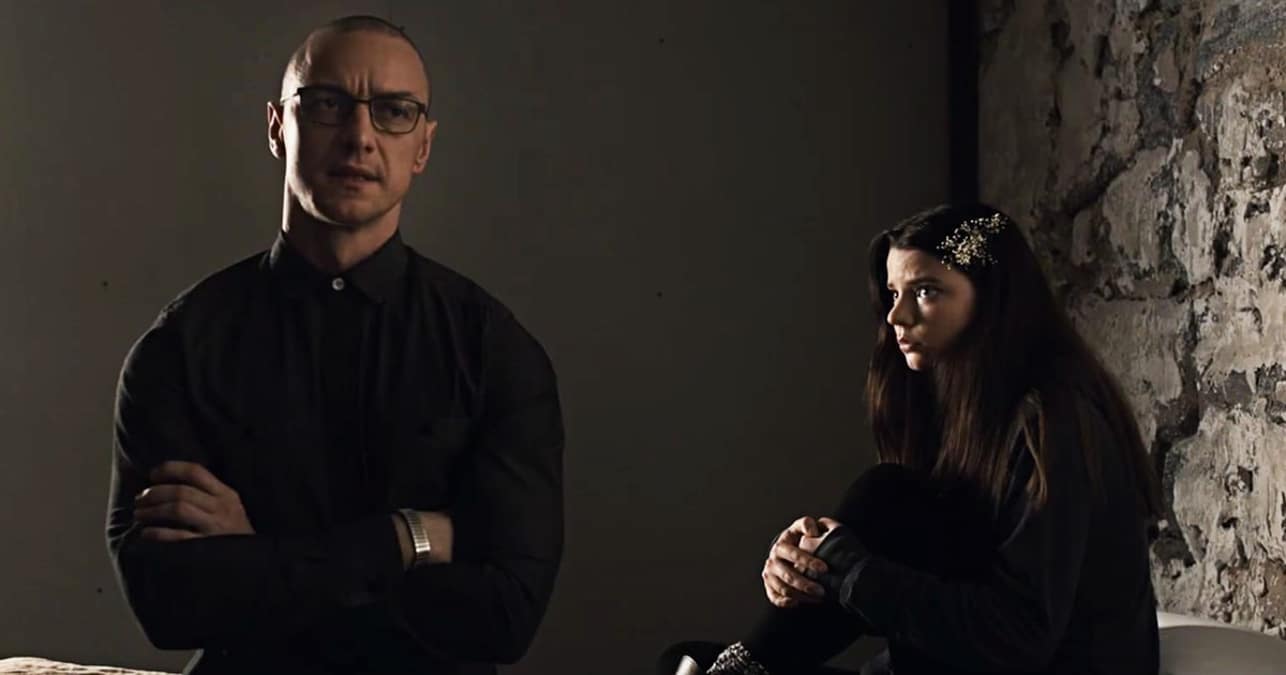 As for Dennis, he’s a toss-up. He appears like a calm and intelligent person. Keep in mind, though, this is the one who aggressively chloroforms the girls. Yet, you’re not sure what’s going to set him off. The only thing that really upsets him is a spec of dirt or a shirt stain that he absolutely must clean. Plus, he acts completely poised during his and Barry’s session with Dr. Fletcher. But we see his true self come out here too, as both he and Patricia are the ones in control of the other identities. And it’s clear in Dennis’ demeanor that he’s level-headed in public but seems emotionless overall, and therefore, devoid of remorse. Worst of all, however, is when we can feel the fear trickle back in after he demands Claire (Haley Lou Richardson) and Marcia (Jessica Sula) to take off some of their clothes. Aside from the film’s bloody ending, this is perhaps the most perturbing moment between Kevin’s alternates and the young women. But, like with the others, Dennis does nothing inappropriate either.

Ultimately, the Beast is the most frightening emergence in the movie since he eats his prisoners and crawls on walls. He is the bloodthirsty climax that the film banks itself on, as it gives the audience the breadcrumbs to follow, leading up to the finale. Sure, a horror fan might be used to watching an adult try to outrun their on-screen killer. But let’s face it — it’s worse watching a kid do it, especially after seeing the bloodshed that the antagonist is capable of inflicting.

Since this isn’t your run-of-the-mill slasher or demonic horror flick, a psychological thriller involves more complexity. And Split unravels its true theme toward the end: trauma. Kevin’s personalities were born because he was abused earlier in life. While we never see any flashbacks of his childhood, we do get a glimpse at Casey’s terrible uncle and legal guardian.

When the Beast spares Casey upon noticing her body scars — saying to “rejoice” about the “broken” being the purest of all humanity — it’s clear how the rageful 24th personality came to light. While Split wants you to fear Kevin’s two dozen alters, it also wants you to understand why they exist in the first place. And this is hard for any film to do: Make the viewer feel sympathy and empathy for its archetypal monster. Nevertheless, it’s clear for one moment why the Beast and all 23 other identities exist in Kevin. There’s a part of him that’s angry and the only parts of his mind that can express that are his alternate selves.

Although Split is considered a “stealth sequel” to Unbreakable and a stepping stone to Glass, it’s a rare piece that can stand alone through its suspense, impressive acting from the cast and, above all, its unique choices. After all, who would think of creating an underground prison below a zoo?

Arguably, Split is the most thrilling movie in the Unbreakable trilogy.