An Ode to Trauma

The Invisible Man is smart. Not only does it differentiate from most psychological thrillers with its scientific angle, but it also emphasizes trauma. One of our worst nightmares is having the whole world against us — not believing us when we’re screaming for help. And the 2020 horror provides a gradual scare by tapping into this common concern.

Firstly, Elisabeth Moss’ approach to portraying Cecilia was flawless, but certainly not effortless. It’s easy to feel her pain when she hesitates to step outside the door, when she turns around knowing Adrian is somehow there, and when she pleads with her loved ones to believe her. Though the audience generally knows how experienced she is in the realm of trauma from The Handmaid’s Tale, we don’t see her recreate that show; rather, we watch her embody a truly terrifying and relatable situation.

In terms of the cinematography, The Invisible Man uses various camera angles throughout its entirety. As a result, it feels like we’re constantly watching something different over the course of two hours. We don’t only get zoom-ins of Cecilia’s face. Instead, we get excruciatingly slow pans across a room, a tactic that leads us to tense up in our seats as we expect the frightening, invisible stalker to suddenly appear. One particular moment in which the camera choice stands out is the kitchen showdown between Cecilia and the unseen monster. When she challenges him to face her, the frame feels like we’re being turned upside down alongside the main character as she takes in her surroundings. It’s reminiscent of those camera styles in action movies where we’re taken into another universe. However, we’re still in this small bubble between Cecilia and her stalker.

To touch on its uniqueness even more, director Leigh Whannell ensured his movie had a much different kind of suspense in comparison to others. By starting the film with Cecilia’s escape, Whannell is trusting his audience to quickly climb aboard her hectic ride and understand what she’s been through.

After we’re smacked in the face with her traumatic position, viewers only get tidbits that the invisible killer is present — the swift motion of grabbing the knife and the small puff of breath behind Cecilia are just the beginnings of this trail of breadcrumbs the movie leaves for us. Then, of course, we’re stabbed with the eventual unveiling of Cecilia’s controlling stalker in the bedroom scene between her and Sydney; the avalanche quickly hits us after that. However, we’re constantly on our toes whenever the protagonist is alone. After all, he could be lurking right beside her while she frantically looks around in the dark. 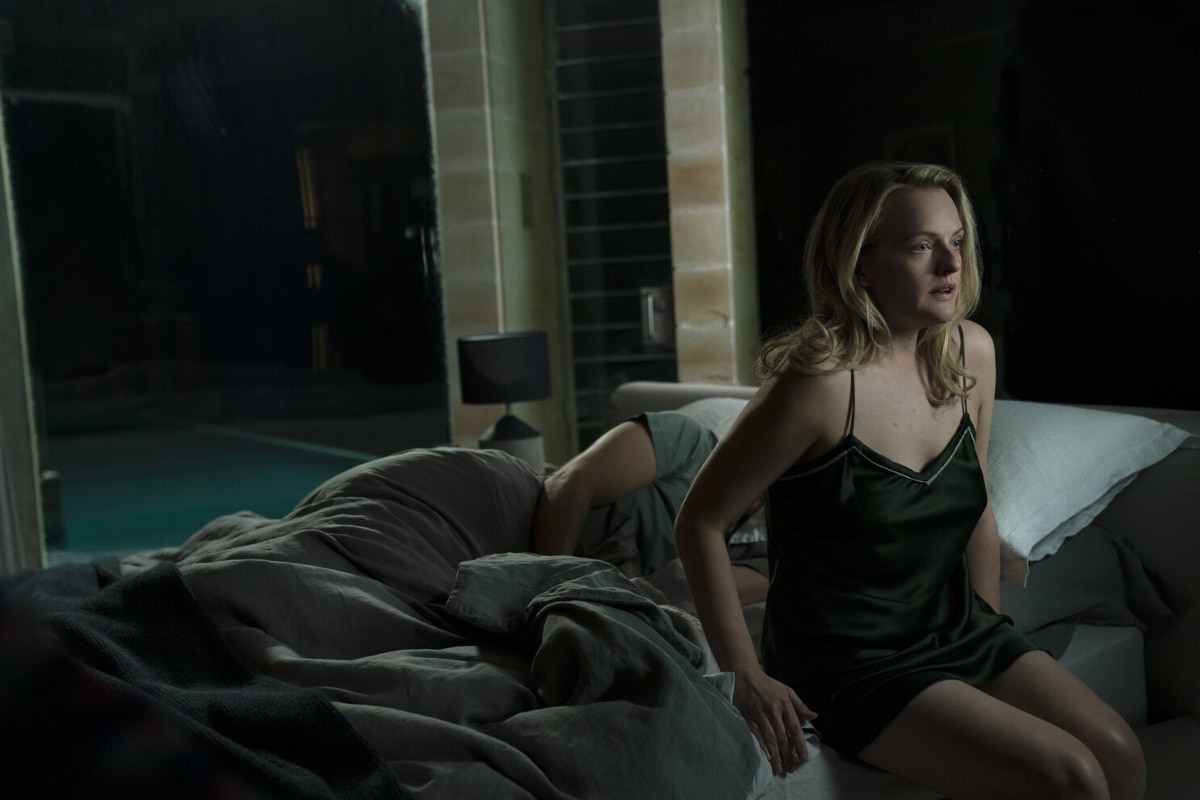 What makes The Invisible Man a winner is that it doesn’t try too hard in scaring its audience. Its ingrained suspense seems as if it was easily integrated, yet was likely calculated every step of the way. We don’t expect many of the strange occurrences to happen but when they do, we’re forced to keep up with the pace. At times, we feel like the movie is slowing down, but it accelerates immediately by taking another step through violence and jump scares. The level of violation and invasiveness Cecilia experiences stays with us, as viewers must gather themselves quickly after another one of the stalker’s strikes.

Trauma is precisely where the Universal Pictures flick thrives. For women, they’re watching someone get dismissed for her claims against her former boyfriend, and she is deemed crazy and delusional. And for men, we see two brothers, who apparently were never on the same page, both accuse the other of “controlling” them. This violating toxicity frightens us the most. Who knows exactly how to escape from a brilliant, manipulative tyrant without the inevitability of payback? It feels like a losing game and viewers don’t just see how Cecilia handles it; they feel her pain through it all as she physically deteriorates in front of our eyes when Adrian slowly haunts her.

Perhaps the most intelligent choice, however, is Cecilia’s capabilities. She’s rightfully so scared beyond anything, but she isn’t a punching bag. She keeps bouncing back after getting knocked down — physically and figuratively — by the invisible killer. Nevertheless, we don’t get a full glimpse at this until the very end of the film, which leaves us gasping for air after we drowned alongside her.

All in all, The Invisible Man encourages us to keep checking around the darkness in our bedrooms and to stare at each empty chair as if someone’s there. It plants the seed of trauma in our heads and stays there while we root for Cecilia to ultimately escape. But is that really all she wants in the end? Leprechaun Reboot in the Works