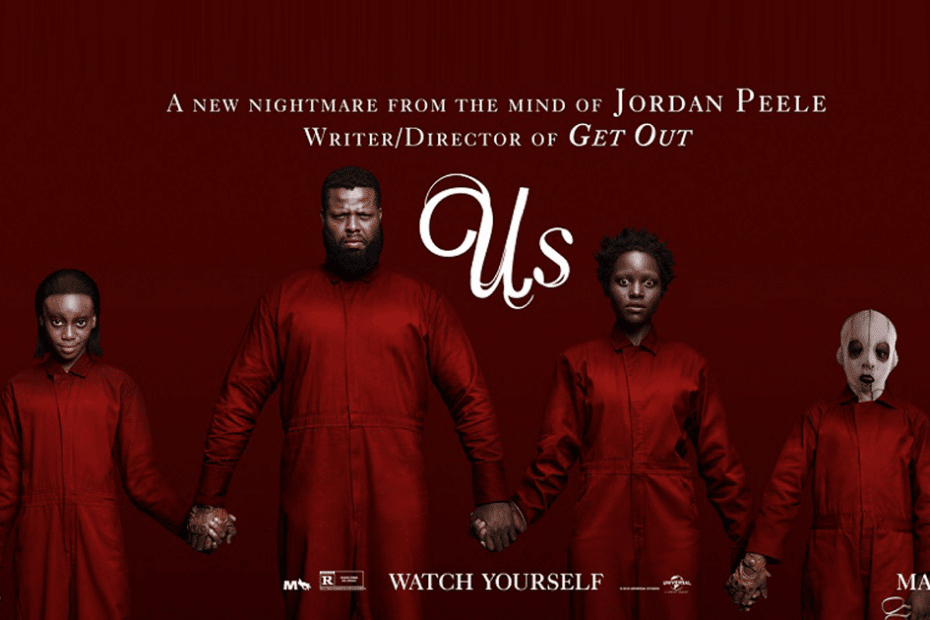 Us is a Mind Bender

Jordan Peele took the train home from work when he was younger and thought of an underground world that humanity wasn’t aware of. Us taps into that fear we all have. How do we know if life away from earth — or perhaps underneath it — doesn’t exist? If we can exist with all of this technology and intelligence, then why couldn’t another human race?

His 2019 horror movie is arguably one of the most astounding, mind-bending stories ever created with a balance somewhere between Inception, A Quiet Place, and even a smidgen of Silence of the Lambs. However, it’s not only because of his unique plot or star-studded cast but also thanks to Lupita Nyong’o’s incredible skill to visibly contort herself into another person. Because of her, Us serves a truly haunting, slithering feeling to its audience.

The movie follows Adelaide “Addy” (Nyong’o) who has a happy life with her husband Gabriel (Winston Duke) and their children, Zora (Shahadi Wright Joseph) and Jason (Evan Alex). The family goes on vacation to a beachfront home — a place where Adelaide was traumatized as a child when an unexplained experience happened to her in a funhouse with a girl who looked just like her.

Now as an adult, Addy grows increasingly concerned that something is about to happen, which, of course, does. A group of four masked attackers descend on the Wilson family after Jason tells the parents, “there’s a family in our driveway.”

Starting with the cast, the audience sees multiple recognizable names aside from Nyong’o. Elisabeth Moss from The Handmaid’s Tale and 2020’s The Invisible Man and Yayha Abdul-Mateen II from 2021’s Candyman. While Abdul Mateen isn’t seen on-screen as much, we still see Moss’ stellar talent come to life in her role as Addy’s friend, Kitty.

One notable scene in particular is when Kitty and her husband Josh (Tim Heidecker) are invaded by their “tethered” doppelgangers in their own home. Moss cleverly portrays her alternate as a serene murderer, who calmly smiles at her husband (Josh’s alternate) after they brutally stab the Tyer family.

The entire scene happens in a flash, but Moss and the entire Tyler family cast skillfully play their eerie counterparts well. It’s when Moss’ character Kitty helplessly tries to crawl toward her slain husband when we suffer along with her through the anticipation, as both she — and we — know that it’s useless; her tethered self will do what she came to do.

But the scene where she really shines is later on when she captures Adelaide. The slithering smile Moss wears throughout most scenes is satisfyingly and unsettlingly creepy. Next up is the mirror moment Moss has is just plain scary to look at. First of all, she looks completely different from her alternate human self, who we meet in the beginning, It’s as if Moss takes on a new physicality with her tethered being as she slowly pushes the knife to her cheek and smiles, all the while maintaining a frighteningly thrilled expression in her bright blue eyes.

And finally, Moss deeply scares us in one more way. Her tethered character has a moment when she freaks out and sobs, which gradually turns into a nightmarish laugh. Audiences can never wipe that sound nor the image from their minds.

Strap in for some seriously weird sights, but not in the way of being truly terrified. The terror comes from the entire concept of the storyline. The imagery makes us question what on earth we’re watching. It intelligently confuses us.

Starting with the rabbits in the underground community, a viewer can’t help but think how seriously random that is. But was it that much of a random choice on Peele’s part? The answer is, probably not. A rabbit typically symbolizes rebirth, fertility and innocence in Western cultures. But what some don’t know is that it also represents fear, and acts as a trickster in certain cultures.

So, when we see the little white bunnies innocently hanging out underground that Red (Nyong’o’s tethered character) brings us to, the innocent little ones might be a sign of trickery. It’s also noticeable how they seem so unbothered by the disturbing environment Adelaide walks into. Did Peele choose them as a method to foreshadow Us’ insanely clever and well-calculated ending?

While the entire cast is brilliant, Nyong’o reinvented the way an actress embraces a horror role. Her devotion to her double role as Red and Adelaide is astounding because she skillfully switches her tone and movement.

The scratchy, baritone-sounding Red is a huge distinction compared to Addy’s higher, more recognizable voice. We’re not sure whether Peele gave his underground leading lady this pitch because she’s been locked down there forever, or maybe because she barely spoke up until this point of the tethered’s war against humanity.

Nyong’o must have worn out her throat with the way she sounds throughout the movie’s entirety when we see her as Red. An actor having to play someone with laryngitis the whole time basically sums up how she sounds.

But it’s even more complex than that. Red sounds more like a broken, struggling instrument dying to work correctly and reach a higher, more defined pitch, but can’t because of how damaged it is. Red is also actually exhausting to listen to. Every time she walks into a scene, viewers feel like they have to hold their breath themselves as she sounds like she’s struggling to speak, but she’s really not. It’s just her voice that we’re not accustomed to.

Like nails scraping against a chalkboard, her voice sounds just as screeching, yet somehow even scarier as we feel a deep pang hit our chests as we listen to her and cower against our seats in fear.

Red is also an odd-moving figure. In one scene when she and Adelaide face off in a classroom, Red swiftly and quickly backs up toward Addy, then switches direction. It’s as if we’re watching a game of Pac-Man.

Peele’s creation introduces us to an alternate reality combined with humanity’s reality. We see both worlds collide, and we catch a glimpse of what it’s like to be intruded upon. However, the point is also to frighten us with another version of ourselves.

In alternate reality-themed movies and TV shows, we tend to see a character’s counterpart differ from them, but not in a huge way. Sometimes, their personalities differ; other times, they just have different mannerisms or a different lifestyle. But Us’ alternates are just downright murderous killers, haunting their victims of their own reflection when they’re killed.

What better way to scare an audience than to use their own mirror image as a way to haunt them. We all know the phrase “many sides to a personality.” So what’s our “other” side? What happens when we get angry and frustrated just like the tethered community?

Us stays with its audience in their dreams. — or, rather, their nightmares. Yes, we’ve all watched slasher horrors when a killer (or killers) slice and dice their victims. And yes, we’ve seen alternate look alikes haunt a character too.

But Peele offers us a different slice of terror that can’t escape our minds. Us isn’t just a bloody horror; it’s an action and a drama film all in one. And when we reach the end, we are left with an ingrained unsettling fear that we, the audience, must try to come to grips with. 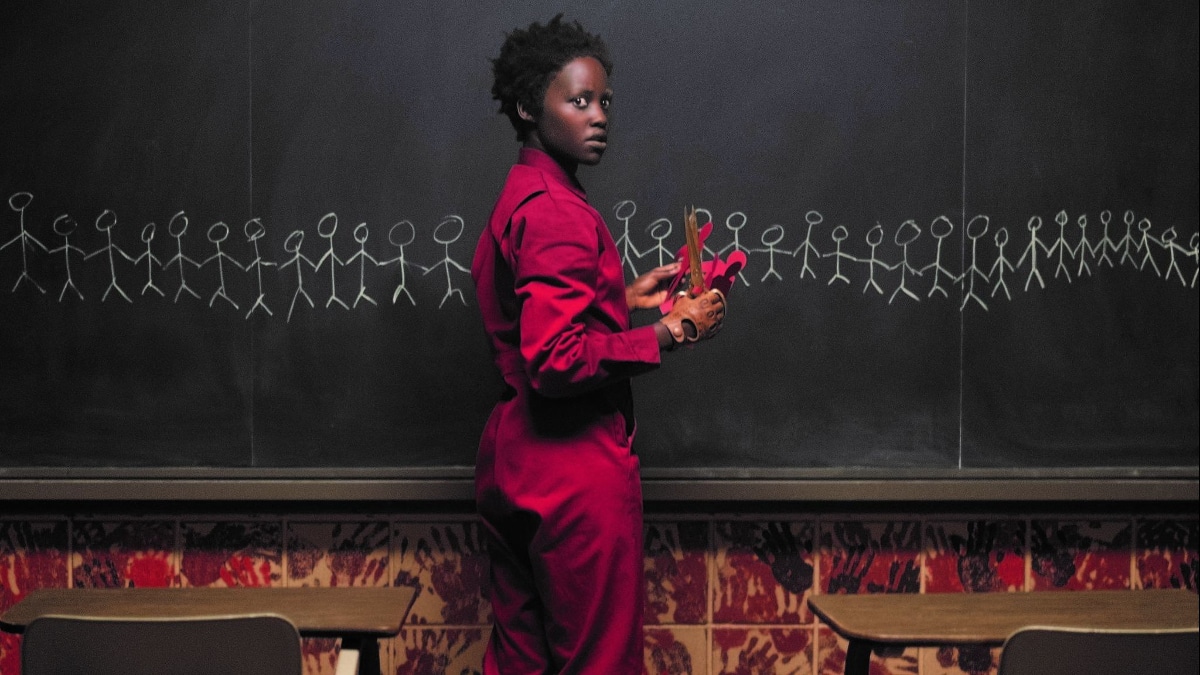