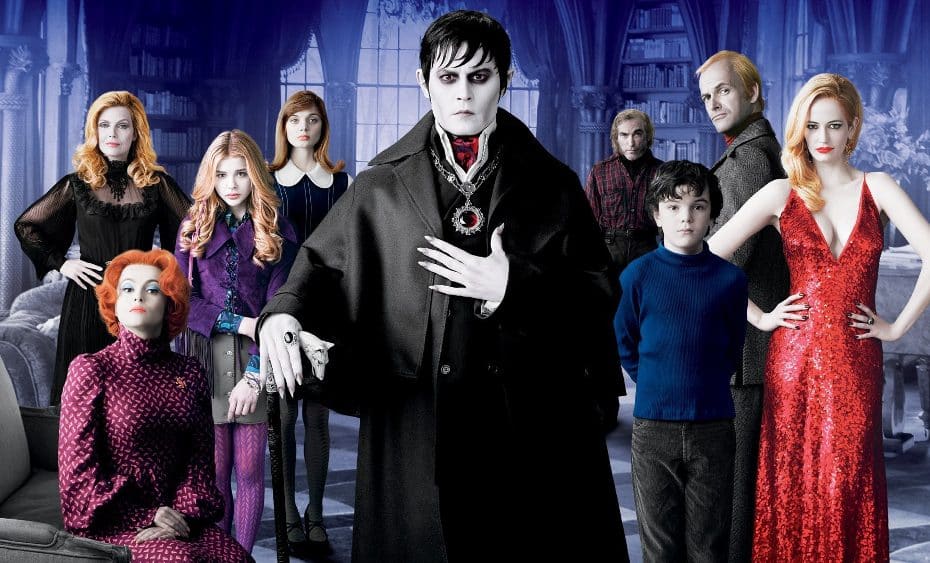 Although this Tim Burton movie is packed with slapstick comedy and enough satire to carry it all the way home, 2012’s Dark Shadows isn’t a home run despite its all-star cast. Led by the famous Johnny Depp, followed by Michelle Pfeiffer, Helena Bonham Carter, Eva Green and Chloe Grace Moretz, the vampire parody rips off of the original gothic soap opera of the same name. So, naturally, we were already going to be in for a funny time given the nature of its predecessor. Any soap opera is usually ripped off in a satirical way later in time, and Dark Shadows does a solid job of making fun of itself through its cheesy, predictable nature.

The film follows a resurrected Barnabas Collins, who awakens in 1972 after being buried alive by Angelique (Green), an evil witch who is hellbent on killing him because of her jealousy and lust for him. His own history repeats itself as Angelique tries to turn the entire town of Colinsport against Barnabas once again as he tries to help his distant relatives keep their grip on the family business.

Nevertheless, the film lacks a strong enough foundation to convey that comedy, no matter how skilled the cast is. At times, it feels as if instead of spurring a cackle within its audience, the script — and therefore, the actors’ performances — feels as if they’re trying to force a laugh out of viewers by throwing them with a lot to absorb. Movies such as Freaky and the Scream series do this almost effortlessly — deride themselves, and effectively the entire genre, through quirky reactions, witty lines and, overall, unexpected endings. But Dark Shadows lacks most of this successful formula because it feels as though it’s trying too hard.

This is, of course, Depp’s strong point, as the infamous and beloved pirate Captain Jack Sparrow we all know. His approach to portraying the confused vampire who wakes up two hundred years later from an underground coffin seems effortless for him, making it easy for us to laugh along with his thorough awkwardness.

Depp’s disillusioned demeanor stays consistent throughout the film, adding a stronger flavor for the audience to taste. When he meets the modern Collins mansion residents, Depp carries each conversation with the others as the uncomfortable elephant in the room. But he’s not the only one who deserves a gold star for his performance — the rest of the cast holds this movie on their shoulders, despite its askew storyline. They balance out the uncomfortable tension between themselves and Depp’s character skillfully.

Bonham Carter, as we all know, is similarly devout to each of her strange fantasy roles, just like in Harry Potter. Her careless and snippy behavior throughout Dark Shadows as Dr. Hoffman is priceless, especially when she meets Barnabus at the breakfast table: “Who the hell is this?”

Pfeiffer’s character isn’t the most intriguing, but likable for her sharp stance as the mansion’s matriarch, Elizabeth. She’s believable in how she won’t let just anything go over her head. And it’s interesting to watch her (although uselessly) shoot down Angelique in one scene, marking her own position as the real leader of the town.

Grace Moretz is a firecracker in any role she plays, and she portrays the moody teenager Carolyn well. The only problem with watching her is that Carolyn is an annoying character and Moretz fully devoted herself to the role. 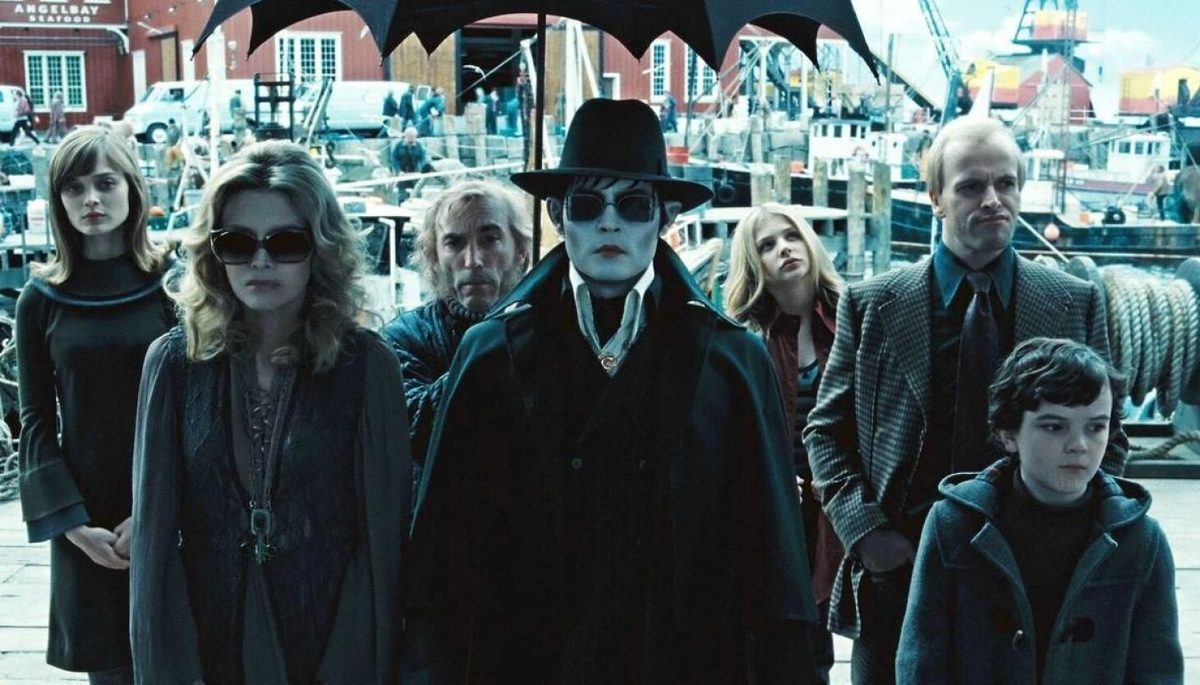 Although the movie has multiple weak points, specifically with its supporting character backgrounds and the entire plot line, the most perplexing area is the love story it attempts to tackle — the one between Barnabus and Victoria (Isabelle Heathcote). In fact, their budding romance is upstaged by the sexual tension between him and Angelique, since they apparently had a fling back in the old days.

While he’s clearly smitten for her, it feels as though there either were or could have been more scenes between Barnabus and Victoria. Their romantic kiss scene would have been great if we were given something else with their chemistry beforehand. Instead, we see a mish-mash of multiple other events that were likely stuffed into the film as an attempt to give it more excitement. But that only tarnished what we could have seen between Barnabus and Victoria.

Their ending, of course, is as epic and sweet as it can be, given the circumstances of the story. But we can’t help but think, “Wow, that was fast,” regarding their relationship. They went from an introduction, to one small take of them walking together, to them making out and, then, all the way to their fateful conclusion.

Since it feels so rushed, some Twilight haters might even think that film has a more intriguing love story because it actually unpacks it all throughout its first movie. Dark Shadows, on the other hand, chases after what it could have had if only there was a better build-up between Barnabus and Victoria.

Despite its flaws, Dark Shadows provides one unique point — the strength of its two opposite female commanders: Elizabeth and Angelique. Pfeiffer and Green portray their juxtaposition perfectly, starting with the first “conversation” they have when they greet each other with exasperated, edgy tones.

Plotting two women against each other is the typical and stale method some movies have made, but Dark Shadows works with what it has. As the new caretaker and owner of the Collins family business, Elizabeth has to deal with her local rival as best as she can as a businesswoman. And Angelique doesn’t try to hide her natural wickedness in any conversation, as she obviously uses her physique to overpower others, including other women.

But it’s fun to watch Pfeiffer and Green butt heads this way, before their final moment together when they have to physically face off. Before this, the two play into that recognizable silent hate between two women who have to deal with each other.

Aside from the comical rivalry, it’s also refreshing to see a film that takes place in the 1970s involving two powerful females. Normally, we’d see at least one male caretaker preside over a mansion. But here, we see Elizabeth rule the Collins legacy, with only a little bit of help from a few men around her. And Angelique just doesn’t need help from anybody, clearly. Even though she’s the villain, it’s still exciting to learn how she survived all these centuries and worked her way up into the present era.

Overall, Dark Shadows is a fun little thrill ride to watch on a rainy day. However, it’s simply not Burton’s best creation. The star-studded cast lives up to their potential, with each actor clearly not holding back in their performances. They play into the hyperbole skillfully, and it shows.

The visuals are also a good leg up for the movie, as we’re constantly taking in different colors. We switch from ultra colorful to dark-tinted scenes, which thrills us in the end; the overwhelming mansion and the crashing, rocky waves down below offer a fun cinematic experience.

However, Dark Shadows struggles to offer a clear story for us to follow. It’s a fun merry-go round, but that’s sadly all it lives up to be.