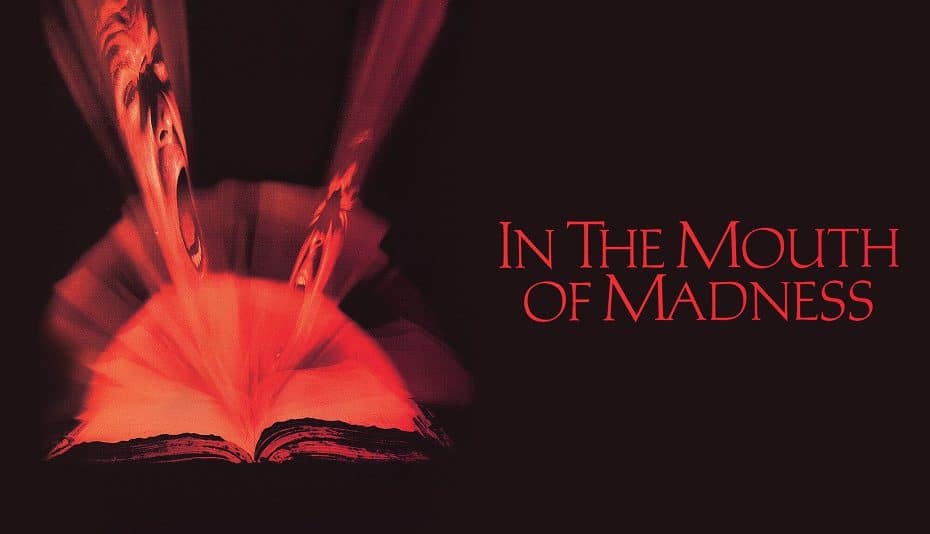 For The Road Trip From Hell, Bring a Good Book

What is The “Apocalypse Trilogy”?

Riding a career peak after starring in Jurassic Park, actor Sam Neill did a 360 the next year, opting to star in the substantially less family-friendly In the Mouth of Madness. Horror fans shrugged, as did most reviewers. The under-performing film built a cult status in the subsequent years thanks to an uptick in interest for anything tangentially-related to cosmic horror, and some very meme-worthy scenes featuring Neill.

Taking obvious inspiration from H.P. Lovecraft, screenwriter Michael De Luca joined forces with director John Carpenter to create the final piece of his so-called “apocalypse trilogy”. This group of horror tales center on otherworldly evil that tears asunder the fabric of society one mind at a time. Unlike those other films, In the Mouth of Madness is less body horror than meta-horror.

As the title suggests, this is a rather bleak and unrelenting horror film. Human emotions, let alone ethics, are irrelevant in light of supernatural forces on a cosmic scale. While not especially bloody or terrifying, it leans heavily upon special effects rather than pure psychological horror. And, it should be said, does fall back on some classic horror tropes. Creepy kids, quirky villages, tentacle monsters, shifting timelines … Yup, things get weird fast.

Sam Neill stars as John Trent, a chain-smoking, sarcastic insurance investigator with a nose for sniffing out hucksters. The story is framed by a flashback where we find a rambling Trent in an insane-asylum, the plot wasting no time getting to the heart of the matter. Amid rumors of a book so sick it turns its readers insane, John Trent is tasked with driving to Maine to meet Stephen King–uh, I mean driving to New Hampshire to find Sutter Cane. The publishing industry is enamored with the mysterious figure of Sutter Cane, a thinly-veiled nod to Stephen King, King even mentioned by name.

Cane moves merch. Only logically, Sutter’s publisher Harglow (Charlton Heston) calls in outside help to locate their missing star author, though not for reasons pertaining to Cane’s mental welfare. Amid his disappearance, Cane’s newest book has provoked a collective violent hysteria across the northeastern region of the US. Despite riots on the street, the publishing house seems more concerned about the upcoming movie tie-ins and licensing deals, highlighting the callousness of the publishers, who are demonstrated to have no passion whatsoever for art.

If there is one glaring flaw it’s that we never explicitly learn of the precise details of Cane’s work or what makes him a fan favorite. Trent dismisses the books as boilerplate drivel, and no respectable character lowers themselves to read Sutter’s oeuvre, that is, until Trent is browbeaten into taking a look. Cane’s fans have a terrible reputation. As for the novels, they simply hypnotize readers or inflict brain damage. Maybe it was a subtle jab at the intelligence of the average horror fan, or a satirical lens to perceive the panic by histrionic parents and pearl-clutching censors over the horror genre. It is never made clear if we are supposed to read anything into this topic at all. That narrative thread goes absolutely nowhere. One wonders if the film’s concepts might have been better fleshed out in novel form. This is a rare case where a novelization might have elaborated on the cult of personality surrounding Cane better than the film.

In addition to Heston and Neill, we get an impressive cast of actors. Nobody was better than Carpenter at casting a horror movie, not only landing a particularly intense Jürgen Prochnow as Cane, but John Glover as an underutilized asylum attendant, and a solid supporting stint by horror icon David Warner. Accompanying Trent is Cane’s editor Linda (Julie Carmen). She serves as the voice of reason and expositor of the movie’s themes, warning Trent that the only thing preventing him being locked up in a padded cell is being on the wrong end of a mob “should the insane become the majority,” sanity in the eye of the beholder. File that dialogue away under the category: Blatant foreshadowing. 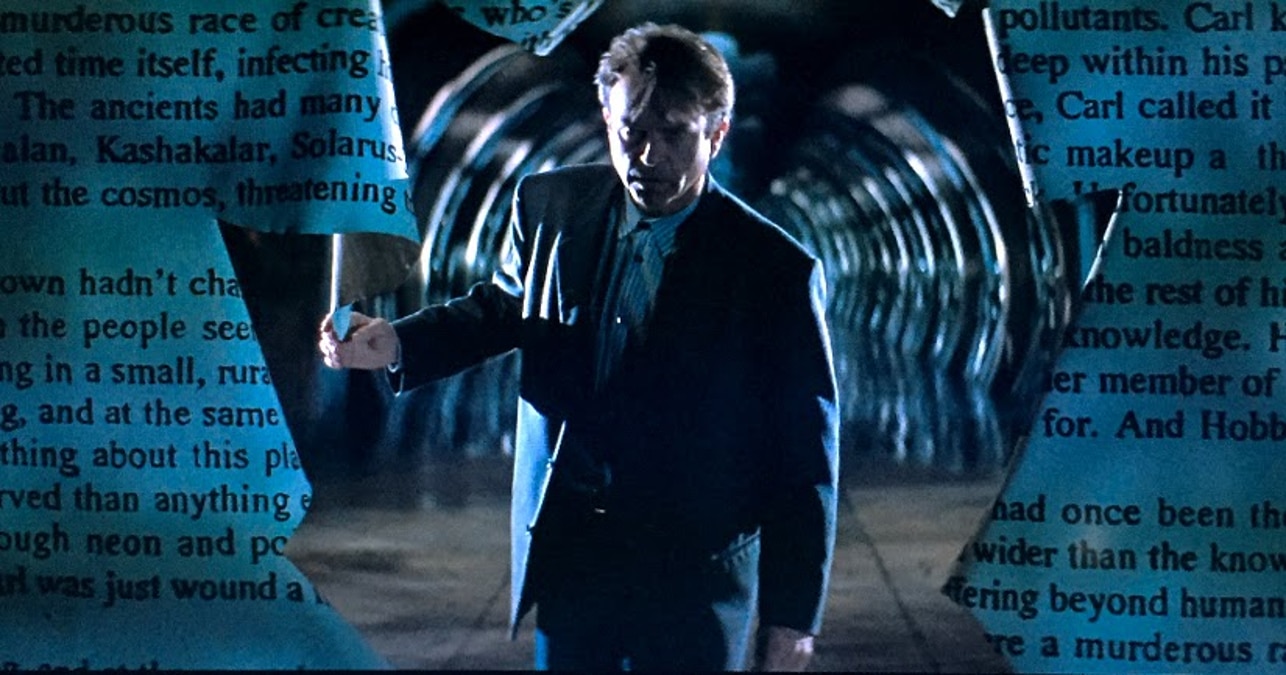 Safety in The Asylum

As a non-spoiler alert, we, the audience, are already keenly aware of Trent’s fate, witnessing Trent in an asylum in a strait-jacket. Thus, the film initially presents us with two distinct possibilities. Either Trent has gone crazy from the book in question, or he is the only sane man in a world run by the insane. The opening rock theme, reminiscent of Metallica, gives away the fact that this isn’t going to be a deep examination of mental illness or toxic fandom; it’s just a thriller. And that’s where the film begins to falter. Instead of opting for a subdued if intriguing concept, it resorts to a more bombastic and shallower route, the plot failing to do the themes the justice it merited. There’s some obligatory religious references, yet those too are merely window dressing.

We are introduced to our protagonist doodling on his cell walls, his clothes, and his own face, tormented by his asylum captors who pipe in muzak, as if to replicate the soothing atmosphere of a shopping mall or toll-free customer help line. Trent has been dragged against his will into a loony bin, but quickly accepts his fate as a paranoid schizophrenic. He’s seen smiling as he notes to his doctor that the world is rapidly “turning to shit out there,” preferring the refuge the asylum offers him. The set-up is undeniably enticing.

The opening scene is interesting in many ways, however it sets up a false expectation. The film veers dangerously close to a satire of consumerism/public relations, a Foucaultian examination of the psychiatric profession and its love of pharmaceutical drugs, or some social criticism. Sadly, it never commits and lands a body shot, mostly settling for a basic detective story with a little humor and special effects tossed in to keep it all moving forward. The core message in all these props and theatrics is murky, if there is any deeper philosophical statement at all behind the meta-horror that unravels in the latter half of the movie.

A Downward Spiral, Not a Linear Path

By no means a masterpiece, In the Mouth of Madness remains a visceral and tightly-made film, and one that has aged reasonably well thanks to its use of practical effects. Between this film and the even weirder 1981 film Possession (another bizarre little curiosity full of tentacle monsters that you also should never watch with your kids or your elderly parents), Sam Neill proves why he was the go-to guy for mental breakdowns in horror movies. If there is any reason to view this film, it’s definitely his performance. There is no “B-plot” or “C-plot” to speak of, and it is a testament to Neill that he is able to maintain our interests for so long on a plot so deceptively thin and increasingly goofy.

The film’s slow pacing builds tension, but it’s not hard to see how the slow-burn build to the finale turned off so many. It’s moody, but never scary. It also doesn’t stick the landing. To risk going too far into spoiler territory, this story is affixed – albeit unintentionally – to an unreliable protagonist whose every action is eventually exposed to be futile or amended. Trent is merely a tool. In a bold, but not wholly wise choice, the director chose to ultimately deprive everyone of a satisfying character arc by the nature of the manner the story is told. Keeping in line with the Lovecraftian idea of unfathomable forces beyond human faculties, the movie’s characters do not have agency. Viewers can be forgiven for seeing that as a gimmick or a cop out. In any account, that’s intentional. It’s baked in. The film either clicks for you or it doesn’t.

There are better movies that explore these themes. Needless to say, this was not John Carpenter at his finest, though the cinematography is quite striking at times and it’s hard to find fault with any of the performances. The use of locations is of special note, the film shooting on location on some pretty uniquely weird and iconic locations in the Toronto-area such as a Slovak church in Cathedraltown and an art-deco water-filtration center, Carpenter making amends for his palm trees in Illinois gaff. Carpenter might have aimed his sights higher with such an amazing crew of actors, effects staff, and crew at his disposal, instead we are left with an enjoyable pop-corn movie with some striking individual scenes, but nothing more.

In the Mouth of Madness is readily available to buy or rent from Vudu, Apple TV, YouTube TV, and most other streaming services. 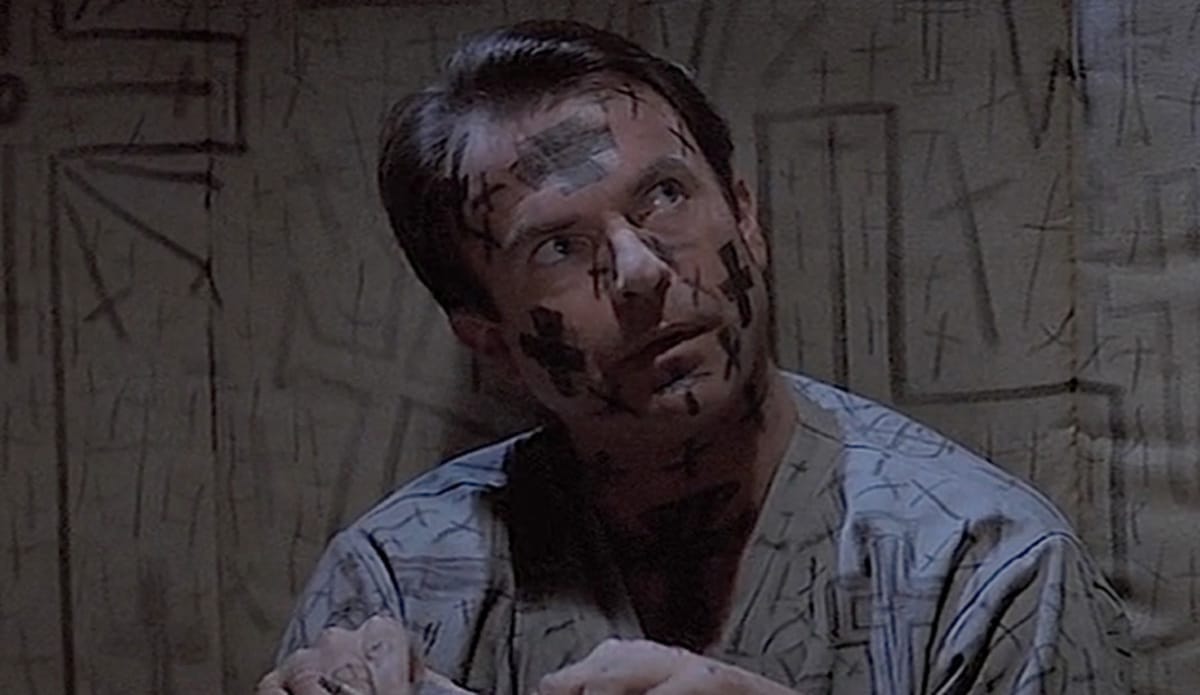 In The Mouth of Madness (1955) Official Trailer