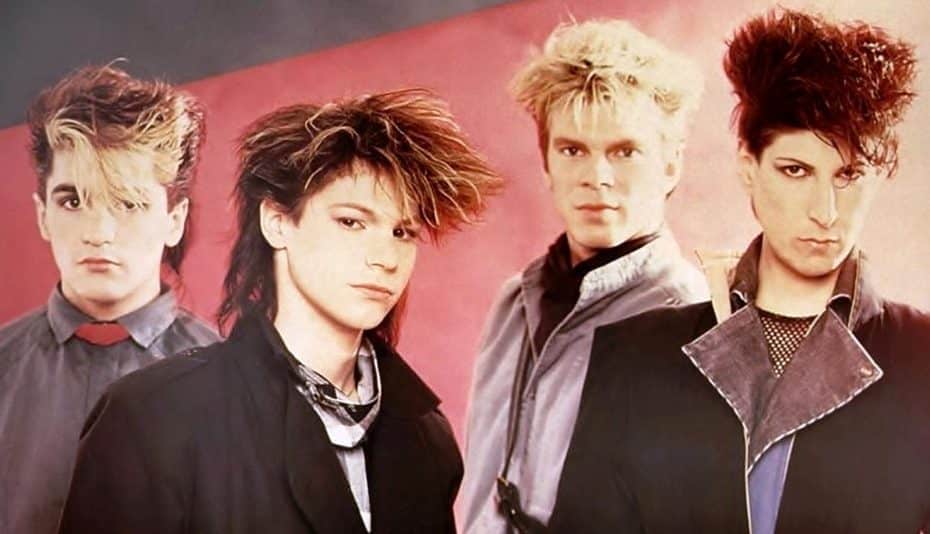 Before Stranger Things needed to raid your parent’s cassette tape collection for offbeat eighties songs, horror films were being proactive and producing their very own branded pop themes. Shiver in fear, rock with abandon, and most importantly, try not to let anyone see you clumsily dancing as we explore the musty annals of infectious corporate cross promotions.

While now a bastion for deconstruction, satire, and serious social commentary, horror used to be all about camp. For those occasions where “Tubular Bells” or a gothic choir of monks doesn’t quite get the job done, you gotta call in the heavy hitters … a bunch of dudes with ridiculous hair, spandex pants, and pet boa constrictors.

I know you hear horror and music and you think Rocky Horror Picture Show, but that would be way too obvious and lazy. The seventies is rather stodgy compared to the following decade, the eighties being the epicenter of horror cheese.

The challenge here is what to leave out. To keep it simple, this list will pertain only to the silliest music possible, and only original music made specifically for horror films by actual bands (sorry, leprechaun rap fans), limit one song per film.

Pseudo Echo brought a distinctly up-beat dance style to the Jason films with their synthy “His Eyes.” It was featured in Friday the 13th Part V: A New Beginning during the death scene of one of the characters. Weird as it was, the director was able to cleverly shoehorn in the incongruous song organically into the slasher film. Sure, the movies got worse over time, but the music arguably only got better. You’ll never dance awkwardly in your bedroom in peace again after seeing this scene. RIP, Violet.

Giallos (Italian horror) always had amazing soundtracks thanks to bands like Goblin. Even the ones that aged badly still lodge in your head for a week. For Lamberto Bava’s 1985 Demons, former Goblin member Claudio Simonetti delivered again. He did not disappoint. Neither did his mullet.

It was around this point that heavy metal became all the rage, the film Blood Tracks enlisting the band Easy Action to star as the doomed rock band so awesome they cause an avalanche and enrage a killer family of uptight snow people.

A lot of musical acts made comical appearances in horror films, but Easy Action’s members deserve extra credit for trying to act. According to completely unverified information on the IMDb site, the band was so scared of being filmed that they had to be lulled into Dutch courage. Or maybe that should be Swedish courage, this film a novelty for being filmed entirely in the frozen, scenic abyss of Scandinavia. After this movie there was a sharp uptick of gothic heavy metal in Sweden and surrounding countries. Coincidence? Yeah, probably. We doubt anyone actually saw this. After seeing the acting, the booze anecdote seems entirely plausible. We can only pray the models they hired have fully recovered from their hypothermia.

“The Man Behind the Mask” – Alice Cooper

Alice Cooper, who narrowly missed a soundtrack spot in the James Bond franchise, finally got in on the movie-soundtrack trend when he landed the gig for the top track in the film Friday The 13th Part VI: Jason Lives in 1986. “(He’s Back) The Man Behind the Mask” returned him to the attention of teenagers thanks to some dense rotation on MTV. The song marked a fitting chart comeback and return to form for Cooper whose career had been on the skids due to a nearly fatal drug and alcohol addiction. Yes, you could consider this an inspirational song.

Cooper and horror is such an obvious match–his live shows are a traveling Grand Guignol performance–it makes one wonder what took so long for horror producers to think of this idea. It’s not like Cooper was ever worried about being typecast as a camp act. It’s hard to talk about any list of horror music and omit the ultimate horror auteur, John Carpenter. To cut costs, Carpenter co-composed or co-performed most if not all of his own films’ tracks. Some have aged better than others. The theme from The Thing and Christine oddly sounds more contemporary than stuff released in the aughts. It’s not all ageless, but damn if this Coupe de Villes song doesn’t fit the tone of Big Trouble in Little China perfectly.

By the way, that is Michael Myers jamming on keyboards and providing backing vocals. He got a little more talkative since his days behind the Shatner mask.

‘86 was a good year for bands in horror movies, double for hair metal acts in horror, the year also featuring a metal soundtrack for the film Trick and Treat provided by the band Fastway. To top it off, the band even gets to murder the audience with a supernatural guitar while the enraptured crowd of headbangers ignores kids being vaporized. It’s the type of scene that looks like it was written by a nine-year-old boy. But damn if it isn’t a rad song, and arguably better than the movie.

Atop of the metal world, heavy metal rockers Dokken took their stab at the movie world, debuting their song “Dream Warriors” in the film of the same name,  A Nightmare on Elm Street 3: Dream Warriors. 1987 marked the apex of the music video trend of awkwardly cramming together arbitrary, out-of-context scenes with assorted shots of the band. Dokken’s musicians pretended to play their instruments and lip sync while avoiding open flames that might ignite their Aquanet-soaked hair. That look of fear on their faces was very real.

“Are You Ready for Freddy?” – The Fat Boys

In 1988, rap firmly established itself as a marketable and permanent trend. Out with hair metal and in with a new, weird genre called hip hop. The Fat Boys were a fun act with undeniable rapping ability, but one that relied on a comic sensibility and self-deprecating humor. Thus, The Fat Boys were called to provide a pretty corny song for the latest Freddy Krueger flick, A Nightmare on Elm Street 4: The Dream Master.

Nobody would call “Are You Ready for Freddy” a gem on par with their early work, but it was nice to hear The Fat Boys rap about something other than food for once. Suffice to say, the Brooklyn rap trio brought their own vibe to the series, Robert Englund (Freddy) unleashing his rhymes in this cornball classic.

Sadly, the golden age of ridiculous music soundtrack tie-ins was already dying out by the late eighties, all but extinct now. Ironically, this is one dream Freddy wouldn’t let die. It was around this time the music business was starting to rub off on Englund, the Elm Street star snagging his own MTV special, the fame going to his horribly disfigured head. Yup, Freddy went Hollywood. And soon fellow horror icons like the Cryptkeeper would jump on the bandwagon, with lesser results. Despite being a sociopathic murderer with terrible fashion sense, Freddy was already more likable than most of the people in the music industry, but that’s a story for another day. 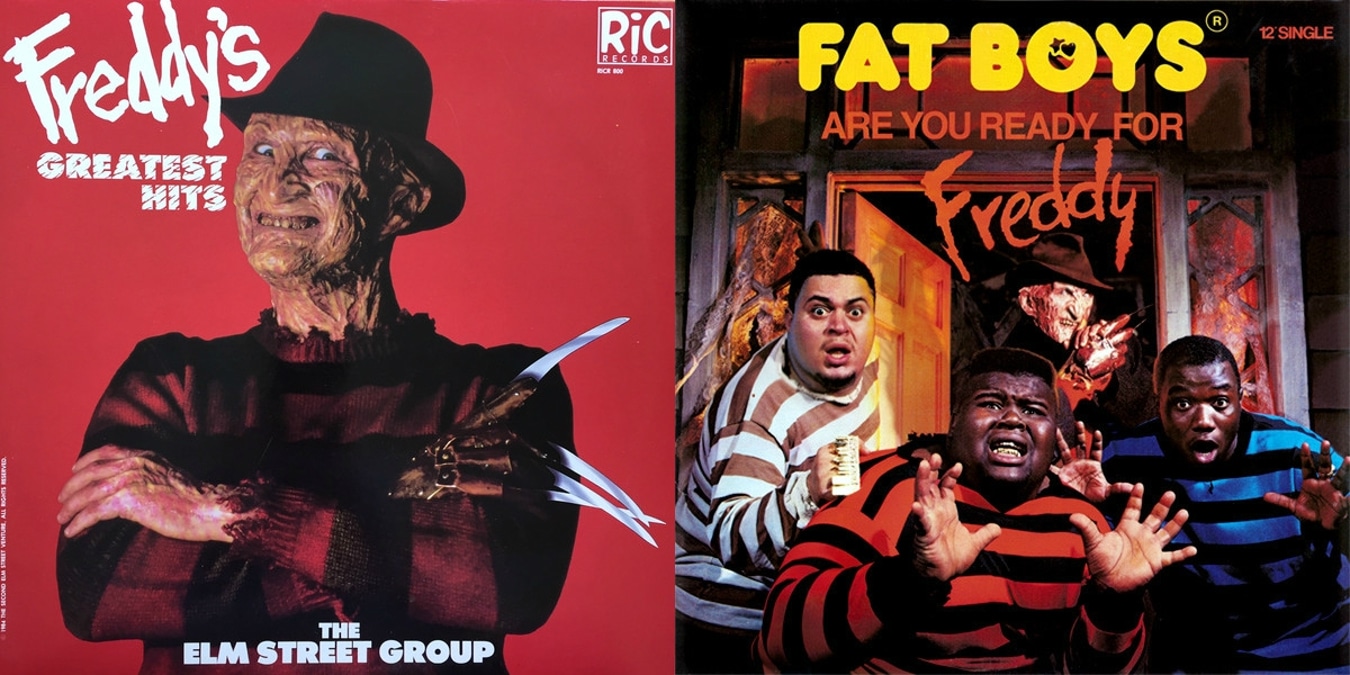