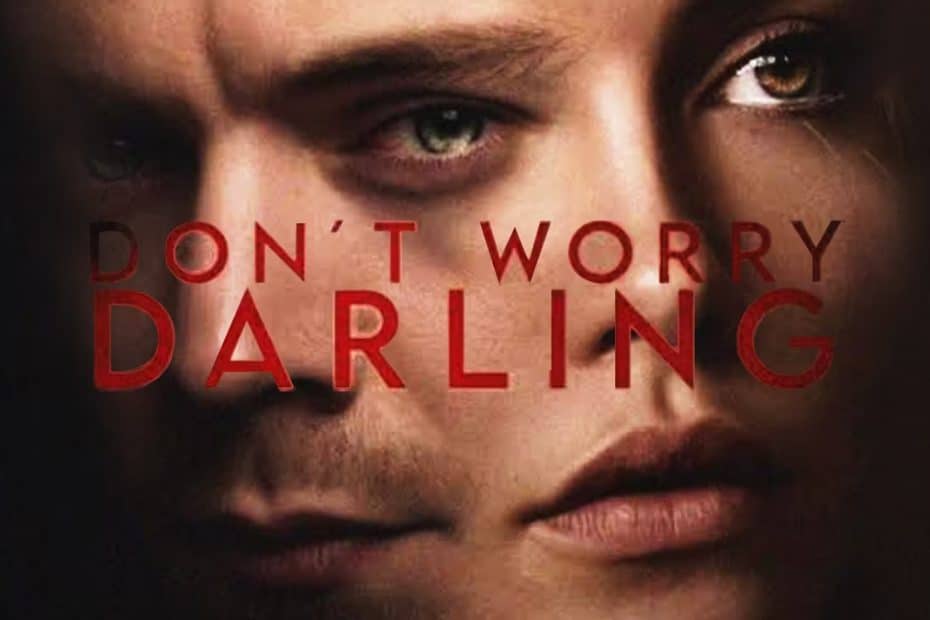 Many came to watch Don’t Worry Darling for Harry Styles but left theaters shocked, disturbed and on the edge of their seats all thanks to none other than Florence Pugh. You begin Olivia Wilde’s film thinking that you know how this will end. But you’re wrong. You’re not anticipating every bit of its appalling ending; you’re only hanging onto your awareness that Pugh’s character is in some seriously messed up fever dream.

We’re introduced to what appears to be a happy, young 1950s couple, Alice Chambers (Pugh) and Jack Chambers (Styles). The two are living a utopian lifestyle in the town of Victory, owned by “The Victory Project,” which initially seems like a cult-ish sales force some of us have already seen in reality. (Think the sleazy sales company from Dopesick.) After Alice sees her friend Margaret (KiKi Layne) acting strange, she soon starts to “hallucinate,” and she questions what’s really going on under Frank’s (Chris Pine) little sunshine-filled empire. But the big boss might not be the one to blame for Alice in particular.

Overall, Wilde’s thriller lacked substance, but it’s hard to put your finger on what exactly it could have had. The chaos in the story unfolds so quickly that it doesn’t give viewers time to figure out what it could have done better. However, perhaps that was the whole point, which if so, was a smart creative decision. There were moments that didn’t make much sense that, if given more context, could have been slightly more terrifying and believable. The final 20 minutes of the film is where the problem lies. While the beginning of the movie paints a picture using the intricate details we need, the ending glosses over a backstory that we still don’t understand as well as we could have.

Right from the start, the audience is immersed into a ‘50s patriarchy: the breadwinners are the well-dressed husbands whose wives cook and clean for them, and welcome them back from a long, hard day at work to sleep with them. This is what the former American Dream consisted of, believe it or not. And many affluent and/or privileged American men are aware of that. It’s a desire that hasn’t faded; it’s still something many people want. The beautiful home with a white picket fence and a stunning scenic backdrop behind the house while the kids run around and play. Who wouldn’t want that?

Jack is the quintessential patriarchal figure, but it’s also clear that he knows he put his wife into a certain position. When he attempts to cook for her one night, it’s clear later on that he knows what was going on. And so, he probably felt the need to make her think he was taking care of her.

Not only that, but he’s a puppet. The moment when Frank gives Jack a promotion is completely tarnished when he makes Jack dance onstage. It’s an odd scene to watch, but that was the entire message Wilde likely wanted to convey. Jack isn’t the typical domineering patriarch; he’s only serving one, and Frank is pulling the strings. However, Jack wouldn’t be here if he hadn’t been so desperate for a picture-perfect life he fooled himself into thinking was all for his wife, and not for his own benefit.

It’s eerie to look at how fast the dynamic shifts from the happy-go-lucky husband and wife to the fights between Jack and Alice. Their first one is when she pleads for him to just listen to her, but he dismisses and snaps at her. And it’s not because he’s exasperated with her. It’s because he’s desperate for her to just let it go and to give him what he wants.

The most horrifying moment, of course, is when he gives her up for “treatment” to force her to sink back into the mindset of the Victory lifestyle. After convincing Alice that he’s willing to leave with her, Jack has his wife dragged out of their car by the mysterious, red-suited army for electroshock “therapy.” As Alice begs and pleads with him — even telling him she’ll change her mind all for him — Jack can’t even look at her. He can’t even face his wife, whom he is torturing by not even laying a hand on her. While she’s being taken, Jack sobs and repeats “I’m sorry” while hanging his head. What a guy.

It’s within this spousal relationship where we see the cracks open. Alice clearly loves her husband, and he thinks he loves her in his own twisted way. So their marriage has been doomed from the start, especially when we find out that Jack said in the past he couldn’t even make his own dinner without Alice.

As a result, Jack gave into the patriarchal choice that is the Victory Project. The real male tyrant in this whole story, though, is Frank, who is truly scary in a few instances. When he walks in on Jack basically slurping up Alice, Frank creepily watches them and he stares Alice down for a moment. It’s bizarre, but it shows how he has the utmost control. Frank’s other defining scene is when he calls Alice a “good girl” while he taunts her from behind. It’s tense and uncomfortable to watch as we see her struggle to come up with an explanation that she shouldn’t have to give.

We see his dominance unfold throughout the film, but it’s primarily through his wife, Shelley (Gemma Chan), where we see his true power. Her supposed undying devotion to Frank is hard to watch because we can’t help but wonder if she’s really supportive of this little world they’re in. 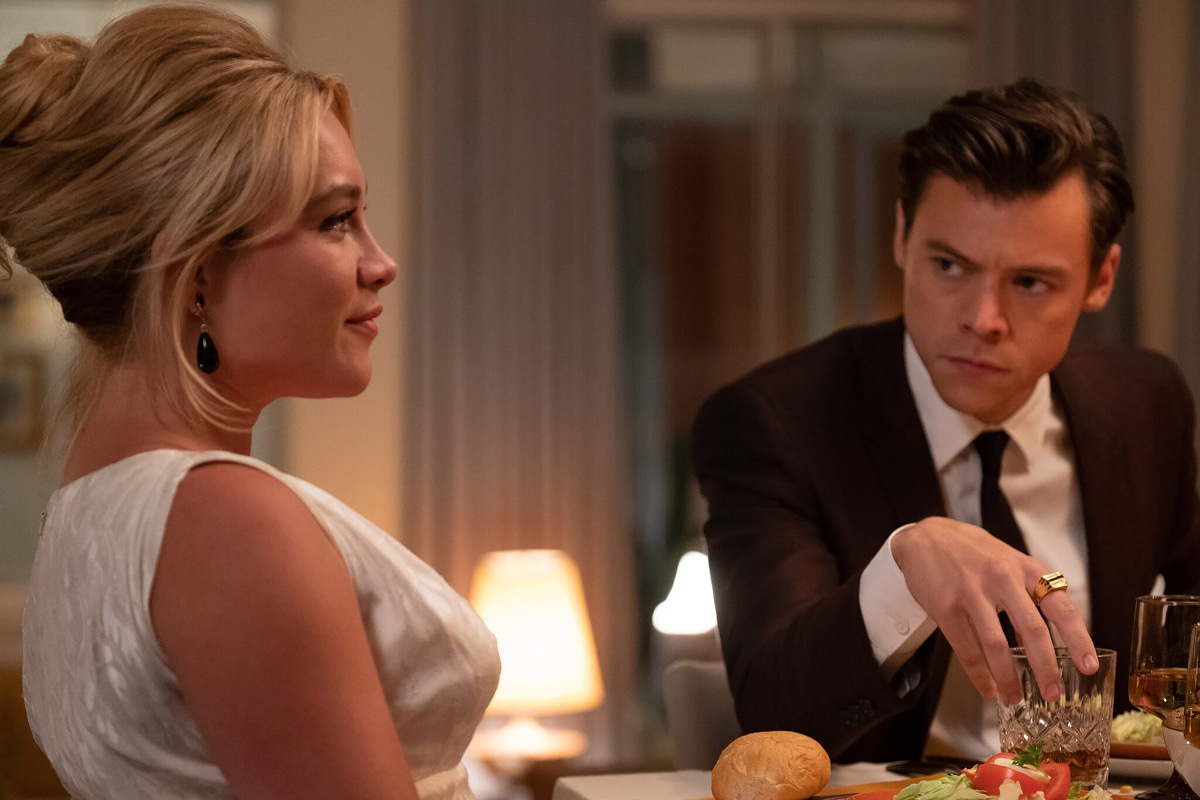 A Mirror of Society

Aside from the overly perfect imagery and town life of Victory, Don’t Worry Darling holds up a big mirror for today’s society. Audiences recognize Jack and Frank’s actions and behavior.

Jack’s fixation on Frank’s leadership is revealed when we see him watching online videos. Nowadays, many people become followers of a movement or a group by doing this, and occasionally, they could be viewing a harmful program. Americans have recently discovered that many disgruntled, frustrated people were attracted to a new way of life by viewing it online, whether that be through podcasts or videos. As a result, they became obsessed with it and were unable to decipher between right and wrong.

Jack is an extreme case obviously, but not highly unlikely either. Once a seed is planted in a vulnerable mind, it’s not difficult to reel them into something.

Apart from Jack, Alice’s past life is also very relatable for many viewers. Whether single, in a relationship or married, there are countless people — including women— in the world who overwork themselves in order to hold it down financially. The Victory Project suggests that this societal aspect isn’t ideal — no kidding. But autonomy is what we all ultimately seek.

Another recognizable moment is when Bunny (Wilde) admits she embraces this new way of life because she wants to live in a world with her children, whom she apparently lost in her past life. Many parents who have lost a child would give anything to live with them once again. But the question is, at what cost?

For a movie with so many intriguing details, we’re left with many unanswered questions. There is so much potential in multiple areas of the story that were left opened, unfortunately, most likely due to time. After all, a movie can’t last four hours in the end.

The Victory Project as a whole could have been explained much more, specifically, its backstory. It would have been fulfilling to see more of why Jack became absorbed by it. We only catch glimpses of him watching little videos with Frank’s commanding voice; we don’t understand why exactly he was consumed by it. Was it just because his wife was gone for 30-hour work shifts? Was it because he was always a twisted narcissist pretending to do everything for the sake of his wife? There must be more. A person doesn’t just buy into a new lifestyle; they must be convinced of it gradually.

It also would have been intriguing to learn more about Bunny and Shelley for reasons that only the ending can give away. Their characters appear to be so certain of their situations, but how did they end up like that?

Then there’s Alice and Jack’s love story. We never find out how they met, what drew Alice to Jack in the first place, any red flags that might have come up before their marriage, what Jack did in his previous life as a career, etc. There are many areas that were seemingly left blank, but possibly left up to the discretion of the viewer. However, this type of psychological thriller should end with just as many details as it begins with.

Is Jack an evil person or just a lost puppy? Was he afraid of Alice leaving him? Are all of the other husbands the same? What led Frank to create this project? Why did Shelley marry him in the first place? What exactly happened to Bunny’s children in the past? What was the significance of the red airplane — the small toy Margaret’s son was playing with and the large one Alice saw falling from the sky?

Don’t Worry Darling is confusing at times but a truly interesting thriller. The cast gave superb performances, with Pugh ultimately leading the way overall through her physical and emotional dedication. Despite what some critics may say, Styles nailed his role; he portrayed the puppeteered, desperate husband skillfully. Pine, of course, did a solid job, as we’ve seen him portray a selfish prince-like character before (Into the Woods); Wilde frightens us in the end with a piercing look in her eyes, aptly convincing her audience of why her character made her decisions; and Chan truly fools us into thinking we know who her character, shocking us as a result. 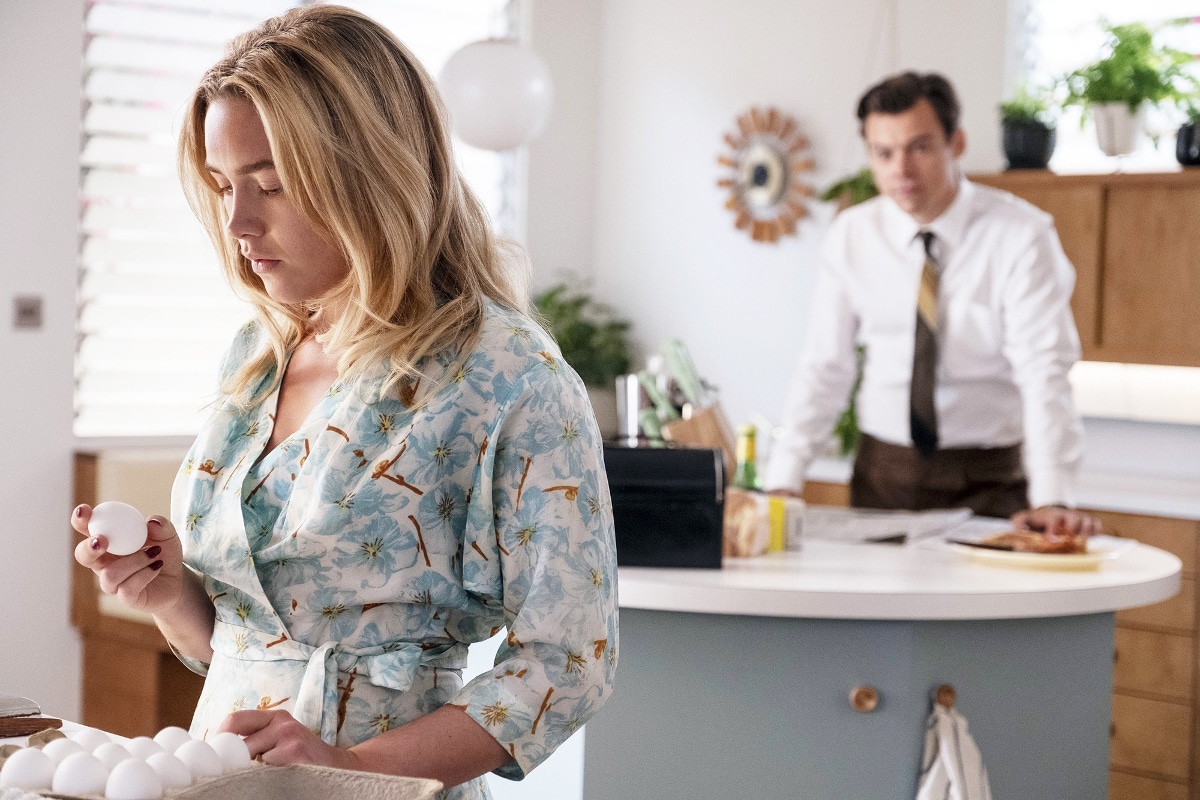