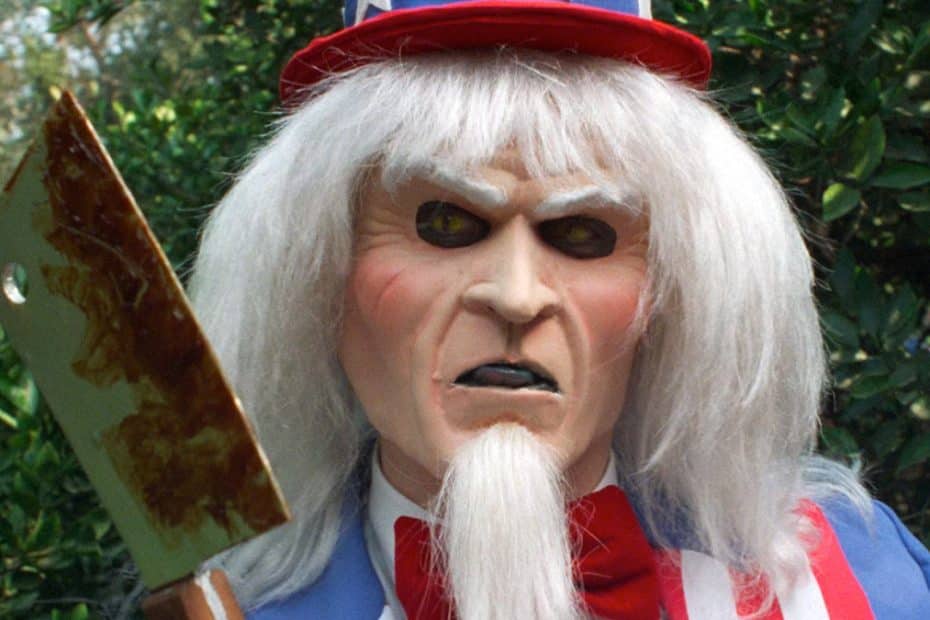 Why is Isaac Hayes Here?

Nine-year-old Jody Baker can’t wait until he can enlist in the armed services to fight for his country just like his uncle Sam. He loves looking through Sam’s service memorabilia and sees him as a hero. He wants nothing more than to grow up and be just like him. But as he spends his days fantasizing about made-up tales of bravery and courage, his mother and aunt hide the truth. Sam was not a good man; he was a monster. His reasons for enlisting were not to serve his country, but for the freedom to kill. His comrades feared him, which is why they shot his chopper out of the sky. But his rage was undying, and when his body is sent back to his family for burial, his murderous spirit returns with him to punish anyone who disrespects their country.

Is the Plot as Ridiculous as it Sounds?

There was an era in horror where holidays and holiday icons were themed in slasher films, mainly for the sake of money. The 4th of July was no exception. Uncle Sam is about a bloodthirsty soldier returning from the dead to slaughter anyone who did not live and die by the flag, and he does so while dressed in a creepy Uncle Sam costume. Just by reading that description, it’s not hard to place this film within the decade it was made, and with that, it’s also easy to determine its quality. First off, there’s no explanation for why or how Sam was able to come back as a revenant, save for the sake of toxic patriotism. It also doesn’t happen for a while. It takes nearly 40 minutes for him to rise from the dead and kill anyone, and by that point, it wouldn’t be surprising for viewers to have lost interest. Things pick up when he does get to work, but it’s no excuse for the poor pacing. Sam’s zombification isn’t the only thing that goes unexplained. Sam also connects with a child telekinetically in one scene, but it never comes back into play. Said child is presented as being important to the plot, but nothing would have been different if he were excluded from the film.

Is the Acting Good?

Uncle Sam may have the worst acting in any horror film from this era, and considering who’s in it, that says a lot. The film surprisingly features two Oscar-nominated actor’s Isaac Hayes and Robert Forster. Isaac Hayes gives the best out of anyone in this picture as the war veteran Jed Crowley, although he didn’t need to try hard at all as everyone around him gives incredibly stiff performances. Robert Forester, on the other hand, is criminally underutilized and only has around three minutes of screen time before being murdered in what is arguably the most nonsensical way in the entire film. Horror icon P.J. Soles (Carrie, Halloween) is also in this film, but like everyone else, her acting screams that she is only in it for the paycheck. Then there are the villains of Uncle Sam, and yes, ‘villains’ plural was intentional. David Fralick does about as well as expected as the zombified Sam Harper. His performance is not anything memorable, but his character was never going to be anyway. 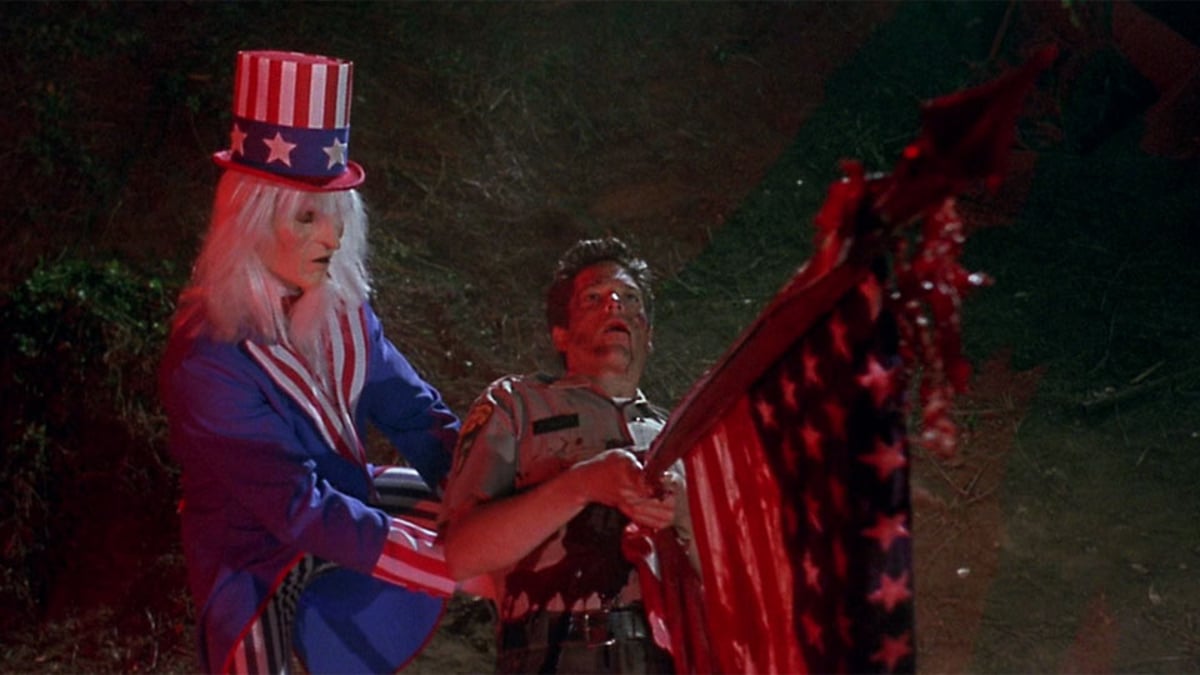 The real villain is his nephew Jody, or at least, he should have been. Whether purposeful or unintentional, Christopher Ogden plays Jody Baker in such a creepy and off-putting way that viewers may be fooled early on into believing he may be the killer of Uncle Sam, and perhaps he should have been. His dialogue and mannerisms are so off-putting that if he were a real person, it could be cause for concern. Somehow, he seems more deranged than his uncle, and Sam buried a man alive in this movie. At one point the producers wanted a sequel. Had they been able to make one, Jody should have been the new antagonist. Somehow, his staring off into the distance in the final seconds of this movie was more haunting than anything Sam did in the entire 90-minute run time.

Is it Even Scary?

One of the only saving graces of Uncle Sam is the gore. Many of the kills are brutal and bloody and should be enough to satisfy the gore hounds out there. The special effects of the nineties were not up to the standard that they are today, but it still looks cool and adds a nostalgia that can easily be identified with this period. The only downside to this bloody imagery is that very few people die on screen. Most times, viewers see Sam’s hand make a striking motion before the frame cuts to the grizzly aftermath. To the movie’s credit, there is a small amount of tension. The second half sees a disguised Sam stalking around the Independence Day fairgrounds in search of victims. It gives off a sense of overlaying dread for those in attendance, but it isn’t much. It also doesn’t help that Sam is not intimidating, neither in presence nor persona. It says a lot when the main child actor is scarier than the main villain, which further emphasizes that it should have been Jody doing the killing. But to be fair, child killers may have been a bit taboo at this point in time.

Uncle Sam is an acquired taste. It is by no means a good movie, and it’s hard to classify it as so bad that it’s good. For a movie to fall into that category, there needs to be enough over-the-top absurdity for it to become watchable. Most of the first half is boring. The second half does go faster, so anyone who can stick it out that long may be pleased. It may be a good movie to have on while doing chores so that it may provide background noise. Also, some of the themes may give implications to anti-military sentiment, but it’s a ridiculous movie from a ridiculous era, and nothing about it should be taken seriously. 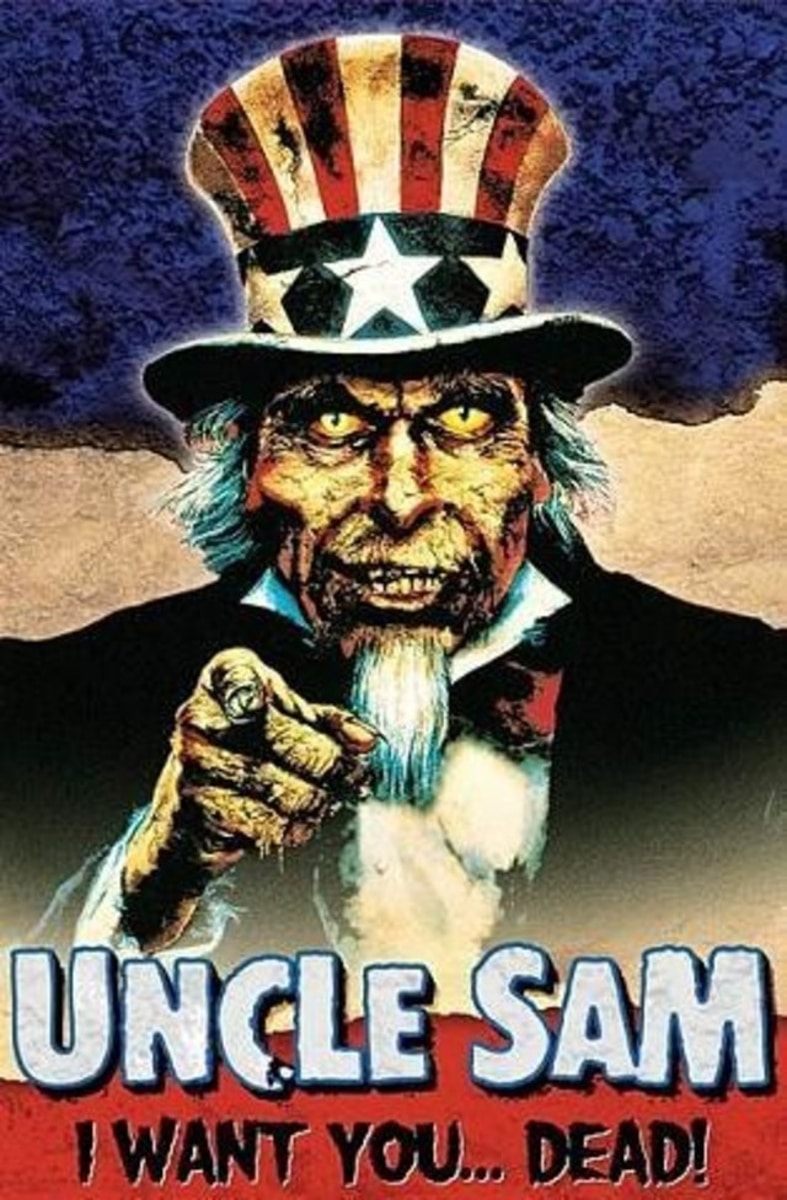 Who Will Be the Next Horror Icons?