Home > The Deadliest Villains in The Walking Dead History 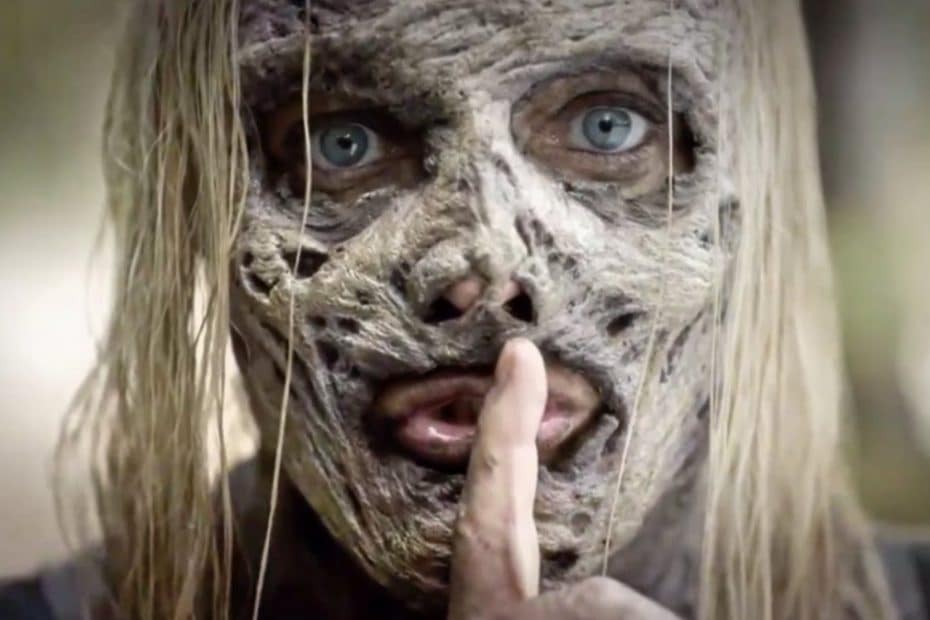 The Biggest Monsters are Those Feigning Their Humanity

There is this idea that humanity shines its brightest during great distress. These are the periods when we band together to overcome and demonstrate our strength of spirit. If anything stands as a witness to the counter is the plot of The Walking Dead. Although fictionalized, The Walking Dead creates an account of how humanity would fare in a world overtaken by the undead. While it seems rational that humans would set aside their differences to survive the biggest threat to its continued existence, they do not. In fact, in this world, humans become competing threats alongside zombies. In fact, if anything, the apocalypse reveals how monstrous and villainous some humans can become given the opportunity.

It was once said that there are no heroes without villains. In fact, one could easily surmise that the existence of villains causes the strongest, bravest, and worthiest to rise. If this is true, then the caliber of vile entities faced by the core group of survivors in The Walking Dead has created some of the most courageous and spirited heroes in television history. Who are these monsters?

Viewers meet Dawn in season five. She is a leader at a hospital where she and several others are squatting. But there is no judgment in this regard. A hospital is as safe a place as any other when attempting to shelter from apocalyptic conditions. Ironically, Dawn Lerner is a supposed officer of the law. However, it appears the apocalypse rotted her brain long before she could become a corpse. Dawn is a bitter and manipulative character with an angelic façade. She is pure poison. Once Dawn gains control, there is hell to pay to get from under her thumb. Lerner earns her place in The Walking Dead villain’s hall of fame as she is responsible for the death of Beth Green, daughter to Herschel and sister to Maggie. Whether Dawn takes Beth’s life by accident or on purpose does not matter. There was no rationale for Lerner’s actions. And so, she was dealt with accordingly, swiftly.

Lance Hornsby is the slimy snake with designs of leadership or lordship. He is an underling to Pamela Milton in the current season of The Walking Dead. He takes whatever opportunities he can get to get a leg up. And most, unfortunately, his actions have led to an all-out war between the Commonwealth and the core survivors. He has no allegiances. Unfortunately for him, his diplomacy is a little too weak. Darryl and Carol use his manipulation tactics against him and finish him off.

Milton is a ruthless woman that feigns kindness. Her only thoughts are on maintaining elite status. She is an autocrat, aristocrat, and dictator rolled into one. If it doesn’t impact her, it doesn’t matter. She damns everyone else to hell. She is responsible for the death of many of her constituents. She also is responsible for injuring Judith. When it comes down to the final straw, she plans to feed those she believes to be beneath her to a horde of incoming zombies. That includes our beloved survivors.

Gregory is a spineless leader and a sellout of the highest order. He is slicker than a used car salesperson. Unfortunately, the surviving group faces some of their biggest challenges dealing with him. First, he places his people in danger on several occasions. Then he always tries to weasel his way back into the good graces of those he has betrayed. He leaves Gabriel to die. And he sides with the Saviors repeatedly after being targeted by them. He couldn’t be trusted. Gregory would take first place if there were an award for the greasiest scumball in the series. However, his shenanigans were put to an end when Daryl administered him an appropriate execution after a judgment call made by Maggie.

He was the ultimate sidekick with designs of leadership. Beta was Alpha’s second in command. Yet, he often questioned her commitment to the Whisperer’s mission and, at times, called out her softness for her daughter. However, as long as Alpha maintained leadership, he was the great henchman. But after Alpha’s death, fans saw how deranged Beta was. Beta gets a place due to his ferocious and fervent campaign to annihilate Rick and accompanying survivors. He is noted as leading one of the most massive herds of zombies to Alexandria.

Additionally, he slaughtered many of the community’s residents. Although Alpha was the leader, Beta was the tank, and he needed to be dealt with swiftly. Like the hero, he had become Daryl once again administered justice. 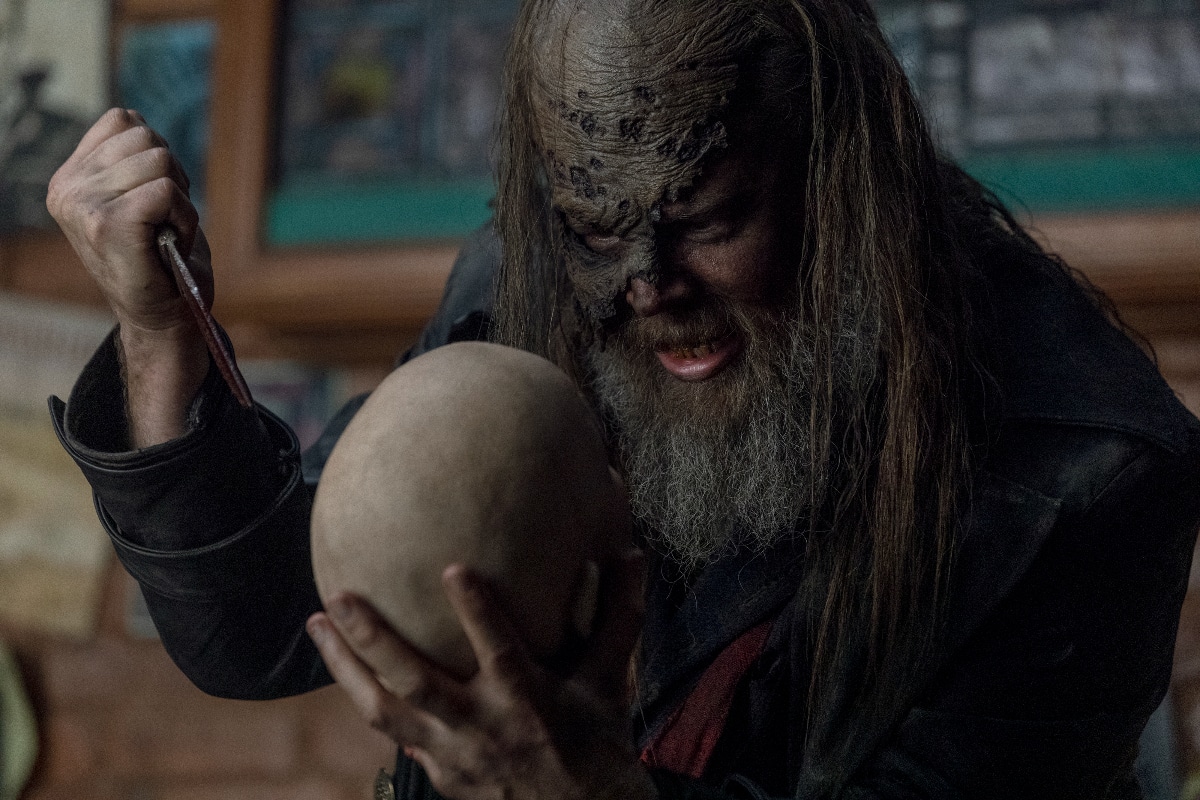 Simon was the wise-cracking, hard-nosed, and hard-hearted sub-leader under Negan. He is what some would define as unflinchingly sadistic. Somehow his inability to express any deep emotion made Negan come off as compassionate. That wasn’t an easy thing. Simon isn’t afraid of flexing his muscle and ego. And when he thinks Negan has gotten too weak, he tries to usurp control of the Saviors. Simon is so petty and so removed from humanity that he annihilates an entire segment of survivors, “the Scavengers.” The reason behind his mission of slaughter being they chose to ally with the Alexandrians. That wouldn’t fly. Thankfully this villain falls on his own sword. It is Negan who rids the world of his vileness.

If death had any other name, it would be Alpha. Alpha is a spiraling mental case and leader of the Whisperers. Her mind has been long poisoned. The distress of her life, followed by the ongoing apocalypse, has tainted her rationality. However, she is no idiot. As such, she becomes one of the biggest threats to the hilltop, The Kingdom, and the Alexandrians. She is only loyal to those she so chooses at the time. The only two who seem to move her in any fashion are Beta and her dear Lydia. This makes her extremely dangerous. She is known to slaughter her own if she is moved to do so. Alpha is also responsible for the deaths of many of those linked to the core surviving group. Henry and Tara, amongst others, were beheaded, and their heads placed on spikes upon her orders. She, too, is not invincible and is taken down in a collaborative effort.

Sometimes, the biggest villains pose as friends. Shane was the de facto leader of the original core members. He was also a friend to Rick and a lover to Rick’s wife, Lori. Rick’s resurfacing throws everything off kilter, threatening Shane’s leadership. Unfortunately, Shane doesn’t take too well to the challenge. Sadly, his inability to back away and relinquish in any form puts the group in immense danger on multiple occasions. He is hot-headed. And he comes exceptionally close to eliminating the competition. However, before Shane can do too much damage, he is taken down by Rick.  It is the boy he sees as his son in Rick’s absence that ensures he stays dead.

Sometimes, sadness and thoughts of grandeur are a lethal mixture. One may hide sociopathic tendencies for a while, but they always come to the surface. The Governor is one of the most complicated villains in the series history. On the one hand, Phillip Blake seems kind and level-headed. He fools many at the beginning.

On the other hand, he is not as sane as he looks. He is grievous, broken, greedy, and untrusting. His greed, vengeful nature, inability to garner trust and access to military-grade weaponry make him a lethal opponent. And Gregory comes close to eliminating several key members of the group. He imprisons Glenn and charms Andrea, who becomes infatuated with him. He has taken in Daryl’s brother. And he captures Michonne and Herschel holding them as leverage. This leads to one of the weightiest moments in the series, a standoff with Rick and the other survivors at the prison. Horrifyingly, he takes out Herschel and comes close to ridding the world of Rick. However, an insider from his camp ensures he’s not around to wreak any additional havoc.

Negan is the biggest villain in the history of The Walking Dead Franchise. However, he also is the most charismatic. There is simply something about Negan. He has a sickening sweetness, and either people love him or hate him. And weirdly, some love that they hate him. However, he’s no simple man to figure out. He is both merciless and merciful at the same time. He doesn’t have designs on murdering masses for the sake of elimination as his right hand does. Yet he lacks a certain sentimentality. His lack of affect during the times when he is most violent is unnerving. He takes first place for causing the most gruesome death in the series. The level of enjoyment that he expresses when clubbing Glenn to death puts him in a stratum of his own. Ironically as a figure who is the biggest villain of the series Negan has also become one of the most significant assets. He has also helped the group take down four of their nemeses, Simon, Alpha, Beta, and Pamela.

Over eleven years, the creators of this epic show have managed to get their viewing audience to dig deeper. They have demonstrated that monsters come in all forms. Maybe the scariest thing isn’t a world filled with the undead but what people become when civility and order are removed. It is they that are truly the walking dead. The others are merely reanimated corpses. And now that it’s time to say goodbye, its so much easier to see the bigger picture. And it is an eye-opener, something that will remain with audiences for a long time to come. previousDon’t Look at the Demon (2022): A Review
nextAngela Kang to Oversee Marvel’s Silk