Throughout human history, there were myths and fairy tales that told the struggle between human heroes and massive dragons. Whether they came in the form of fire breathing serpents or winged monsters from the sky, dragons have permeated through imagination in every continent for centuries.

With the start of cinema and movies one of the first effects to be brought into motion pictures or monsters and animals that give the presence of dragons. Movies like The Lost World have given prehistoric dinosaurs the placeholder of dragons until live action adaptations of myths started to recreate many of these creatures.

Dragons come in all shapes and sizes, taking inspiration from the descriptions of world myth and culture. They can also be protagonist creatures with voice and personality. Many, especially in horror or action films, are villainous monsters that act like fearsome animals. In fantasy settings, dragons often are the strongest and most suspenseful creatures to face in fights. This list will cover the cinematic dragons that can scare a noble knight from battle.

5. The Cloned Dragon From Dragonfighter

The Syfy channel has released many small budget films featuring dragons and savage monsters. The charm of these films tends to be the hilariously bad acting and creatively designed monsters. One of these monsters is the cloned dragon that was featured in the 2003 film Dragonfighter.

The dragon featured in this film is distantly related to dinosaurs. The last of them plagued humans in the middle ages, only to be buried in an avalanche facing knights in the beginning of the film. The rest of the film follows modern times in a secret underground base where genetic scientists cloned a dragon to life.

Expectantly, things go wrong and the dragon is set loose in the claustrophobic lab, hunting the humans one by one. The dragon is classic in terms of design and shape, having two arms, two back legs and a set of wings that remain folded until the climax. The dragon tends to attack the humans via ambush or a blast of fire, portrayed as a warm blooded reptile that sets its nest near a ventilation area.

4. The Dragon Apocalypse in Reign of Fire

The dragons in Reign of Fire (2002) were ancient, prehistoric monsters that entered millions of years of hibernation after causing mass extinctions. Shortly after the first of these dragons woke up in London, they multiplied into a scourge that wiped humanity into a burnt out apocalypse. Imagine a zombie apocalypse but a bunch of fire breathing dragons instead.

These creatures are also one of the first major dragon designs that make the arms into wings, basically making the beasts “wyverns” or two legged dragons, like the ones in Game of Thrones. They were fearsome and had little weaknesses minus a vision problem in the morning. Their fire breath is a mix of two chemicals in their mouths.

What makes the dragons terrifying is that they show a varied level of intelligence and strategy. Many attempts that the humans had to kill the dragons backfire or get countered by the dragons. A majority of them are female but the largest and most dangerous one is the male bull that resides in the ruins of London. 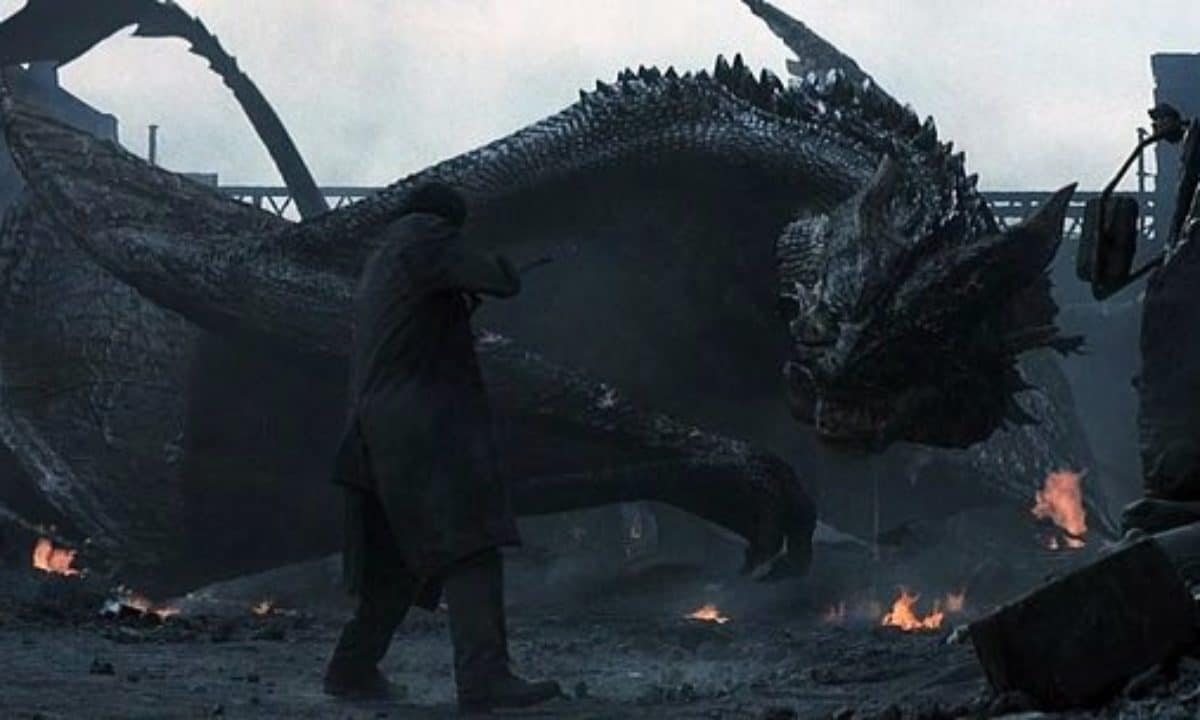 3. Smaug’s Riddles Against Bilbo in The Hobbit

Peter Jackson’s adaptation of JRR Tolkien’s The Hobbit includes a unique and sinister version of Smaug, the fire drake of the North. Smaug is a massive fire breathing dragon that raided the city of Dale and drove the dwarves of Erebor from their home. His occupation of the Lonely Mountain is the drive of Thorin’s quest.

In the film, Smaug’s appearance takes from different versions of dragons combined, being serpentine like germanic wyrms, wyverns, and the classic welsh dragons. Smaug’s voice is done by Benedict Cumberbatch, as well as performing the movements and lip work with motion capture.

Smaug is portrayed as a large and sinister force, sadistically taunting Thorin’s and Bard’s attempts to kill him. In the film he also has some awareness of Sauron’s plans and the ring Bilbo carries. Although Smaug is one of the smaller dragons in Tolkein’s Legendarium, he is by far the largest and most powerful threat in the cinematic films.

2. King Ghidorah in Godzilla: King of the Monsters

The ultimate rival of Godzilla for King of the Monsters. King Ghidorah made his film debut in the 1964 film Ghidorah: the Three Headed Monster. Since then, he has been the most recurring villain kaiju Godzilla has faced and has reappeared alongside almost every new incarnation of the king of the monsters. His design is based on a mix of Eastern and Western dragons.

Specifically, the King Ghidorah that faced off with Godzilla in the Monsterverse is potentially the strongest version of the character. He bares all the strengths of the past Ghidorah’s combined with an eerie influence over the other Titans on Earth. He can regenerate from a majority of injuries including decapitation. Even after being defeated by Godzilla in Godzilla: King of the Monsters, a discovered head suggests that Ghidorah can return in some form.

Ghidorah is smart and tactical when facing other monsters like Rodan and Godzilla, and his gravity beams are some of the most devastating attacks in the films. Ghidorah also holds the record as the largest monster in any setting it shared with Godzilla and towers over the king with plenty of room to glare down with.

In 1981, Dragonslayer introduced a well done depiction of a fearsome fire breathing dragon, Vermithrax. This dragon was made with very convincing practical effects and stop motion animation. The puppet work made for Vermithrax is comparable to the massive animatronics made for films like Jurassic Park.

Vermithrax doesn’t have much personality other than being a vicious predatory monster that menaces Glen. The film, however, does a great job at maintaining the tension and dread in fighting a large dragon – any wrong move and the dragon wins. The introduction of Vermithrax is similar in style to the shark in Jaws.

Throughout the film before the climax, the dragon was heard and certain parts of its body was glimpsed, Its presence was felt by the film score and atmosphere. This made the first full view of Vermithrax impactful during the climax. 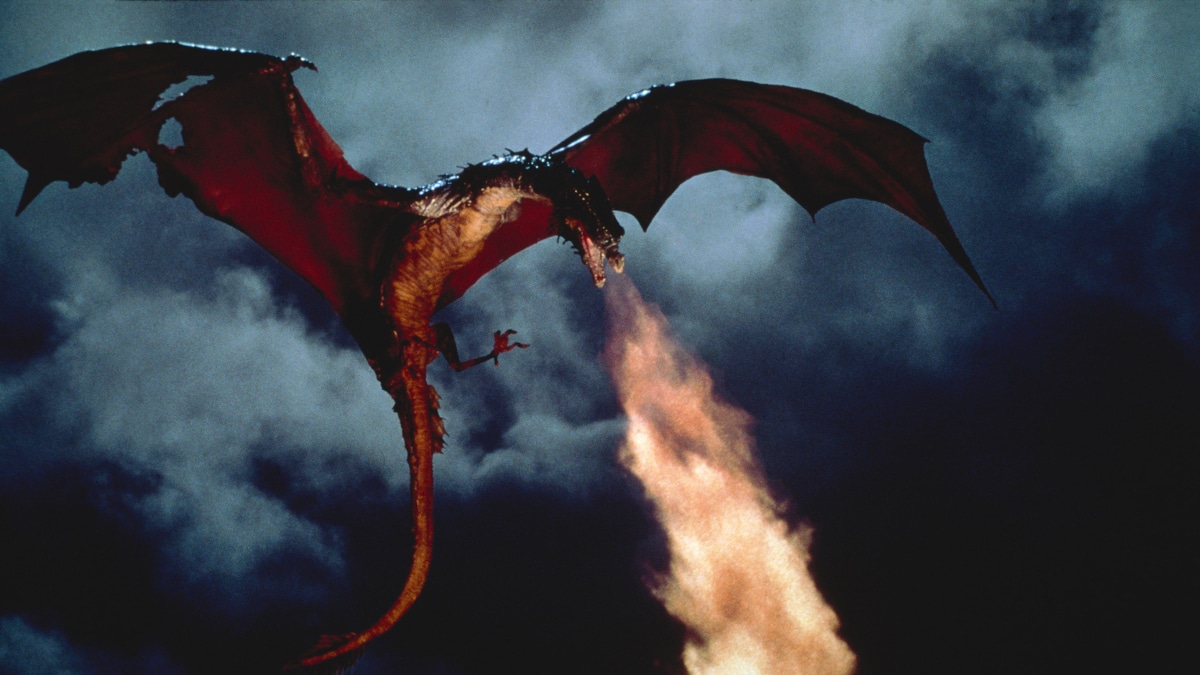