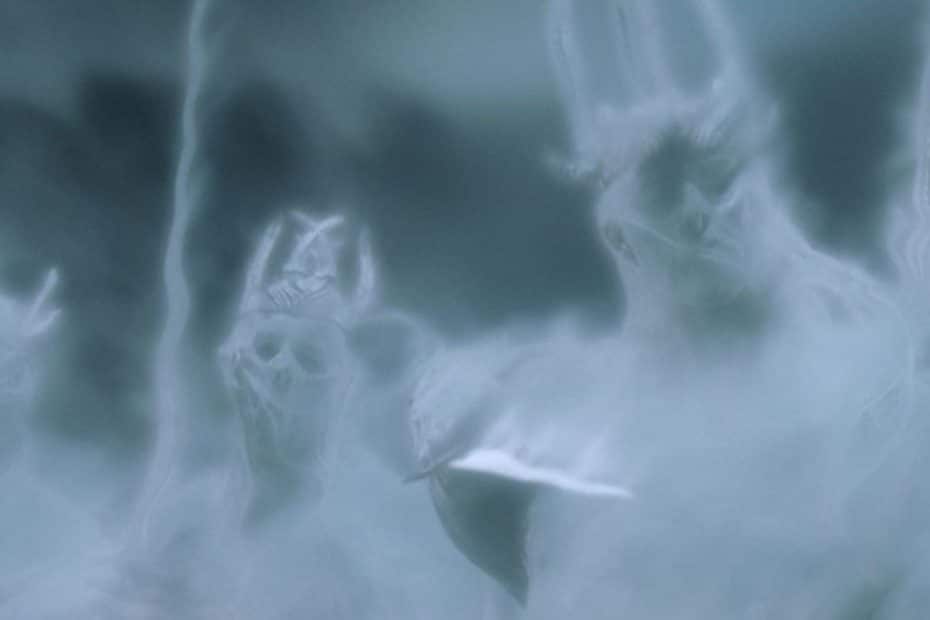 Since the beginning of storytelling in human culture there have been tales of spirits from worlds beyond our understanding. Ghosts have been a part of creative stories in adventures and horror. Some spirits are known to be helpful and a guiding protector for the heroes of their stories. These are not those spirits.

Ghosts are often described as the lingering souls of humans who’ve passed away. In several religions and mythologies, these spirits have a place to go to, whether it’s Heaven, Hell, Paradise, Valhalla, or some other nondescript underworld. A spirit that is punished or filled with wrath and hate are often condemned to wander the Earth and become one of the most terrifying forces humans face in folklore.

These phantoms or poltergeists tend to remain in a specific location, normally the place of their death, and target those foolish enough to disturb their resting spot. Depending on the cultures and customs surrounding them, ghosts have many names throughout mythology. Norse ghosts are known as wights and tend to linger in graves and battlefields. Japanese Onryo and Yurei are ghosts that died with fierce resentment or torment, looking exactly the way they did at death.

Ghosts in films have often been misidentified in movies that feature demonic possession. Movies like Paranormal Activity and The Conjuring are more centered around demons, which are other supernatural monsters, instead of just human ghosts. Even so, the impact of ghosts and their uncanny relationship to death has driven the imagination of humans in film, games, and literature.

10. The Asylum Patients of Grave Encounters

In the found footage movie, Grave Encounters, a team of “paranormal investigators” that play up their experiences for a “reality” tv show. They entered an abandoned asylum rumored to have several hauntings to spend one night for their latest episode. Things then went awry when the asylum became an eldritch location, trapping the team inside while they were assailed by the grotesque ghosts. These spirits are mostly human looking except for malformed mouths that stretch horribly wide for jump scares.

9. The Hobbits vs The Barrow Wights

In J.R.R Tolkien’s Lord of the Rings, our heroes have encountered all different manners of phantoms and poltergeists affected by the dark magic of Sauron. One type that didn’t make the cut in Peter Jackson’s trilogy are the Barrow Wights. Spirits of long dead kings from an ancient kingdom, they haunt the barrow-downs in The Fellowship Of The Ring book. They are the third major threat Frodo and his hobbit friends faced on the way to Bree and were close to claiming them in the tombs until Tom Bombadil rescued them. The Barrow Wights are ghastly wraiths with the appearance and origin inspired by the nordic myths of draugr, which are former viking apparitions that guard their burial sites.

8. The Spirits That Haunt The Forest

In the 2016 American horror film, The Forest, the protagonist went to the infamous Aokigahara Forest near Mt Fuji to find their missing twin, only to be haunted by the spirits and visions that inhabit the region. Aokigahara is known in real life as the suicide forest and is controversial as a result due to topical sensitivity. Because of the real life connotations and karma surrounding it, it is a compelling setting for superstitious stories of onyro and yurei ghosts in Japanese horror. In the film it’s shown that the forest has a psychological influence of those that enter and the yurei are partially responsible for the local haunting and distress of the protagonist.

7. The Ghost of Jacob Marley

Disney’s animated retelling of A Christmas Carol features Jim Carrey as Ebenezer Scrooge in a fairly mature take of his hauntings. While the ghosts of Christmas past, present, and future have their moments of scares and uncanny suspense, special mention goes to the appearance of Jacob Marley. Marley’s ghost leaves a startling first impression of the supernatural elements of the story, with a combination of the close ups, jump scares, and the mangled image of the ghost that mutilates itself. While he’s still trying to help Scrooge from going down the same path he did, Jacob Marley is still a very unnerving ghost to watch especially for children.

6. Sae Kurosawa, The Phantom of The Crimson Butterfly

In Fatal Frame 2: Crimson Butterfly, Mio and Mayu Amakura are lost in the Lost Village and must navigate it while facing off multiple yurei. The main antagonist and the source of the curse in the village is Sae Kurosawa. Sae was part of a twin sacrifice ritual where one twin kills to contain the abyss. Sae’s sister fled the village while she was captured and sacrificed, only for the ritual to fail anyway, causing the village to fall to darkness.

Sae Kurosawa wanders the Lost Village as a crazed yurei combined with the manifestation of the abyss. Her influence and affect is so powerful that in game she dramatically affects the atmosphere, causing the game to go full monochrome. The miasma she creates lasts until Mio manages to escape her pursuit. Sae is also one of the few ghosts in the game that can one hit kill regardless of healing items so avoiding her until the end of the game is the only solution. Luigi’s Mansion for the Gamecube and rereleased is the most family friendly entry on the list, but the moments of scare and the atmosphere can still be intended for younger gamers. Ghosts will appear out of nowhere, which can startle Luigi and the player due to controller vibrations. The ghosts are diverse appearance wise. Some are more cartoony and silly, while others are genuinely unnerving. The more human-like ghosts tend to be more threatening and are treated as intense boss battles.

4. The Specters of The Witcher

Geralt of Rivia hunts all manners of ghosts and phantoms throughout The Witcher video games. They’re all under the specter category in the bestiary and consist of wraiths, Barghests, and noon/nightwraiths. Unlike most monsters, a silver sword isn’t enough to tackle them. To effectively beat them in battle, Geralt must use moon dust or Yrden, a sign spell that eliminates their intangibility.

All these varieties of wraiths were formally humans that suffered an unfortunate fate and tend to have unfinished business in the mortal world. Noonwraiths have the most terrifying appearance and can ambush travelers unlucky enough to be present in their haunting grounds. There are several ways to free them from their connection to the world from finishing their business to cremating the remains of their physical bodies.

3. The Nazgul & Their Hunt for The Ring

Sauron’s chiefest servants and the plight of the free people of Middle Earth. The Nazgul, also known as Ringwraiths are the shadowy remnants of the ancient lords of men. All nine of them fell to temptation with their rings of power and after living unnaturally long lives eventually faded into the realm of shadow. The Nazgul are drawn to the One Ring and spend most of the first book hunting for Frodo who bore it to Rivendell. The threat of the Nazgul was what drove Frodo to attempt a shortcut that led him to the barrow-downs.

When they lost their horses by the rivers near Rivendell, the Ringwraiths were temporarily driven back to Mordor. They were then given new steeds that are flying monsters, making them terrifying threats during the War of the Ring. Many of them patrolled Mordor while the Witch King of Angmar, lord of the Nazgul, commanded Sauron’s army for the War against Gondor. The Nazgul were some of the most iconic and terrifying elements of the Lord of the Rings.

Kayako was an ordinary wife who lived happily with her young son and husband. One day, she developed an obsessive crush on a teacher named Peter. When her jealous husband found out, he brutally murdered her, their son, and their pet cat. The brutal nature of her death caused her to curse her home with a Ju-on, a grudge based curse that spreads death. Anyone who enters the house is subjected to the curse even if they leave.

Kayoko is an unstoppable force of hate that has haunted dozens of people before dragging them to their ultimate fate. Her basic appearance is her long stringy hair, blue pale skin, and her white blood stained nightgown. A horrid croaking sound marks her arrival and haunting. These elements made Kayako a memorable ghost that codified the tropes of Japanese ghosts.

Like Kayako, Sadako from Ringu is a japanese ghost or yurei that is compelled by a curse to hunt down and kill victims of her haunting. Instead of haunting a location, Sadako is manifested through a cursed video tape. As the tape plays she will call the intended victim and announce seven days until their death. In those times she will psychologically break down her victims before literally crawling from the tv to finish them off on the final day. Her insistent pattern along with her iconic visage made her one of the most iconic and feared ghosts in all media.